SECTION TWO
Current Treatments
LINKS TO: Section One: Parkinson's Disease | Section Three: Starting Treatment | Section Four: Glossary
LINKS TO:
Current Treatments: The Therapeutic Choices Available
Medications
Principles of Management
Dr. Lynch's Research
LINKS BACK TO:
Front Page
About PALS
Aims and Objectives
Information on PD
Relationships
Yoga and PD
Newsletters
Ask the Doctor
Medications
PDNS Page
The Tips Page
Thought for the Day
There are many options available now as regards medications, with four or five arriving on the scene in the Brainteasers
PALS Personal Pages
Contact PALS
the dopamine precursors Madopar and Sinemet COMT inhibitors such as Comtess and Tasmar (the latter has been withdrawn from the European market dopamine agonists such as Celance, Parlodel, and newer ones such as ropinirole (Requip), pramipexole (Mirapexin). Symmetrel (amantadine) is thought to be a dopamine releaser, and can help dyskinesias. If you are taking Sinemet or Madopar and you start to get dyskinesias, adding Symmetrel can sometimes help to settle things down. the available MAOI is Eldepryl (Selegilene) Artane is the anticholinergic available here muscle relaxants can help with muscle rigidity glutamate (NMDA) antagonists such as dextromethorphan, are anti-dyskinetic drugs antidepressants are very important. Some people with PD get very depressed and miserable, and should be treated for it. When dopamine levels are low in the brain, this can lead to depression, as dopamine is very important for the mood and personality areas of the brain. It is not uncommon for us 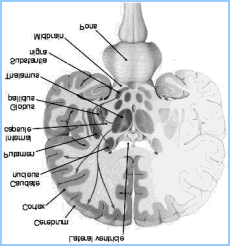 the brain. In some studies on PD, it has been shown to help some of the stiffness and soreness in the short term. Section One: Parkinson's Disease | Section Three: Starting Treatment | Section Four: Glossary About PALS | Parkinson's Disease | Ask the Doctor | Relationships Yoga and PD | News | Newsletters | Brainteasers | PALS Personal Pages | Email PALS