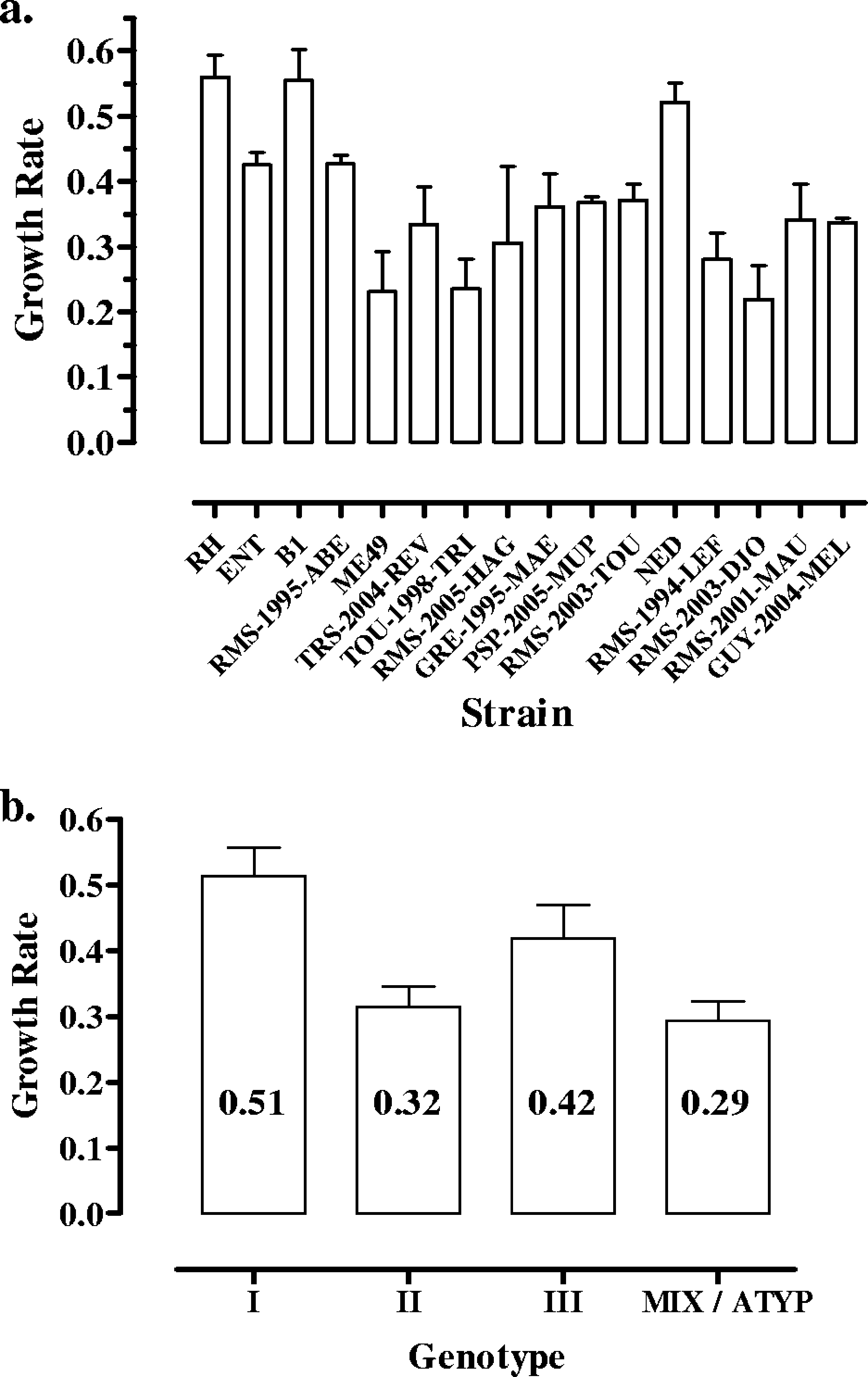 inhibitory effect of SDZ increased more progressively for in-creasing concentrations in the cultures (Fig. 2b).
For three strains, B1, RMS-1995-ABE, and RMS-2001- MAU, IC s were estimated to be Ͼ50 mg/liter. A more pre- cise estimation was not possible since concentrations of Ͼ100mg/liter were toxic for the MRC-5 monolayers. These resultswere confirmed in two additional experiments. High IC s were not correlated with the strain genotype (one strain eachof genotypes I, II, and III) (P ϭ 0.79) (Fig. 3) or growthkinetics (P ϭ 0.44).
Additional experiments were conducted in folate-free RPMI medium supplemented with Ultroser comparatively to RPMImedium supplemented with 10% fetal calf serum in order toexplore the possible interference of exogenous folates on drugsusceptibility to SDZ or pyrimethamine. The use of folate-freemedium did not alter MRC-5 cell growth and had no effect onparasite growth or on IC s of pyrimethamine for the three strains tested, RH, ENT, and B1. For SDZ, IC s in folate-free medium were still Ͼ50 mg/liter for strains B1 and RMS-1995-ABE and increased for two other strains, RH and ENT, thathad low IC s for SDZ (data not shown). From these results, we assumed that the lower susceptibilities of some strains toSDZ were not related to the presence of folate in the medium.
Analysis of drug target genes. Gene sequence analysis of
DHFR, DHPS, and cytochrome b were obtained for all strains.
FIG. 1. Growth rates (values of regression line slopes) of Toxo- The complete sequences of the six exons of the DHPS gene plasma in THP-1 cells over a 7-day period of culture. (a) Growth rates showed several identical mutations in exons 2 (E474D), 4 of the 16 strains. (b) Mean growth rates of parasites from different (R560K), and 5 (A597E, with two silent mutations) of all type I strains as well as one recombinant type I/III strain (RMS-1994-LEF) and one atypical strain isolated in French Guyana(GUY-2003-MEL) (Table 2). In exon 5, a mutation, A587V, genotypes (means of 0.29 and 0.32, with replicating times of 22 was found in strain RMS-1995-ABE, which had a high IC and 24 h, respectively; P Ͻ 0.05).
SDZ. No mutation was found at the position 407 in all strains Drug susceptibility. The inhibitory effects of SDZ, py-
rimethamine, and atovaquone were determined for 16 strains, Several mutations were found on the DHFR gene according as one strain (RMS-2003-TOU) could not be repeatedly cul- to the different genotypes of strains. One silent mutation in tured on MRC-5 cells. The mean IC s were calculated from at exon 3 (156L) was constantly found in all type I strains; one least two replicate experiments and are presented in Table 2.
other silent mutation was found in exon 3 (204A) for recom- Pyrimethamine was examined at 10 concentrations ranging binant strain RMS-1994-LEF and in exon 2 (145V) for atypical from between 0.002 and 1 mg/liter. For all strains, the same strain GUY-2003-MEL. None of these mutations was linked to concentration/inhibition profile was observed, consisting of a a lower susceptibility to pyrimethamine. No mutation was lack of inhibition until a threshold concentration was reached.
found on the cytochrome b gene.
Beyond this concentration, the inhibitory effect sharply in-creased and usually reached its maximum value at the next DISCUSSION
concentration tested (Fig. 2a). IC s ranged from between 0.07 and 0.39 mg/liter (mean, 0.18 Ϯ 0.10), with no significant re- The variable susceptibilities of T. gondii strains to antipara- lationship with strain genotype (P ϭ 0.26) (Fig. 3). However, a sitic drugs and the hypothesis that this susceptibility could be significant correlation between IC s and growth rates was linked to the parasite growth rate were suspected a few years found (Spearman r ϭ 0.55; P ϭ 0.03) (Fig. 4).
after the discovery of the efficacy of sulfonamides and py- Atovaquone was examined at 10 concentrations ranging rimethamine against T. gondii (10, 22). However, until the from between 0.001 and 0.5 mg/liter. As for pyrimethamine, a 1970s, this variability and the possible mechanisms of resis- sharp increase in inhibition was observed over a narrow range tance to drugs were not thoroughly studied. New insights on of concentrations (Fig. 2c). Calculated IC s were comprised the genetic diversity of T. gondii and better knowledge on the of between 0.03 and 0.11 mg/liter (mean, 0.06 Ϯ 0.02 mg/liter).
genetic basis of resistance of Plasmodium and Pneumocystis to pyrimethamine and atovaquone (23, 24, 35, 42) offered new genotype (P ϭ 0.74) (Fig. 3) or growth kinetics (P ϭ 0.51).
tracks for the study of resistance of T. gondii to antiparasitic SDZ was examined at 10 concentrations ranging between 0.0005 and 100 mg/liter. SDZ was inhibitory for 13 strains, with Little is known about the possible relationship between ge- IC s ranging between 3 and 18.9 mg/liter (mean, 8.8 Ϯ 5.0 notype and drug susceptibility. In a study comparing the in mg/liter). In contrast with pyrimethamine and atovaquone, the vitro susceptibilities of one strain each of genotypes I, II, and TOXOPLASMA DRUG SUSCEPTIBILITY AND RESISTANCE for pyrimethamine, SDZ, and atovaquonea a Mean value and 95% confidence intervals from three separate determinations and corresponding mutations on drug target genes. sil, silent mutation; Ex2, exon III, IC s ranging between 0.22 mg/liter for strain RH (type I) mg/liter for VEL (type I) and HART (type II/III). This repre- and 0.005 mg/liter for strains P(LK) and VEG (types II and III, sents a 1- to 100-fold range in susceptibility to atovaquone (4).
respectively) were found, suggesting a 40-fold-higher suscepti- We found no previously reported study on the possible rela- bility of type II and type III strains to pyrimethamine than the tionships between genotype and susceptibility to SDZ.
RH type strain (41). A higher variability was found with atova- In our study, we did not find such a wide range of IC s for quone in one study (4). In that study, six strains belonging to various genotypes were tested in vitro for their susceptibilities between 0.07 and 0.39 mg/liter, i.e., a one- to sixfold range to atovaquone; IC s were not determined, but complete between strains. These concentrations were in the range of our growth inhibition was observed with 1.7 mg/liter of atovaquone previously reported results (14) and those obtained using other for strain RH (type I), 0.17 mg/liter for ME49 (type II) and test conditions with strain RH (3, 18, 28, 31). Higher individual POE (type III), 0.017 mg/liter for CAS (atypical), and 0.017 values (Ն0.25 mg/liter) were observed with two type I strains,