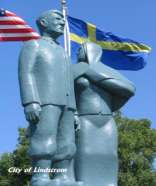 Mayor Carlson called the meeting to order at 7:00 p.m.

1. Monthly Report (pg. 6)
CONSENT AGENDA:
1. Minutes of June 20th, 2013 (pgs. 7-24)
2. Bills List for Approval (pgs. 25-36)
Wishy corrected the Minutes of June 20th, 2013/Committee Reports/CLJSTC/ second
paragraph/to read: Evergreen trees “will” be planted vs. “have” been planted; and also
“stainless steel chain linked fence” to read “chain linked fence”; and also to remove the
words “due to generator” in the second to the last paragraph. He was referring to the sound
coming from the neighboring area (Arby’s, Lindstrom Drug, Napbco, etc.), not the new
generator.
Motion by Flug, second by Brink, to approve the Consent Agenda with the above
changes in the Minutes. Motion carried 5-0.

Administrator Olinger stated the paperwork for the Annexation and Agreements has not yet been processed or submitted to the State Boundary Board. The Township has not responded to the (5) year Annexation period their Residents would have to annex into the City; and the non-reimbursement of the Property Taxes, etc. The Joint Resolution must be revised once we hear this information. The Developer’s Agreement is also being held off until the Feasibility Report is finished, as we need to have the proper Assessment figures. If we were to process the paperwork at this time, the City would become responsible for some of the costs we have conditioned Davis to pay for on this project. We also are requesting ROW for these utilities, and fees/payment for the temporary services. Olinger stated Davis is operating, and received a Marina Permit last night by Chisago County. Wishy commented Davis is conditioned to maintain and achieve compliance no later than September 20th, 2013. He must be hooked up to City Sewer Services by then. ENGINEERING BUSINESS:

1. Engineers Report - Herdegen (pgs. 62)
Engineer Herdegen gave an update on the 2013 Projects. They are now 98% complete. The Parking Lot has been paved and striped. The Coffee Shop Parking Lot entrance is completed. They are finishing up work on the Rain Garden. First Ave. has been completed as well. Landwehr Construction has put in for Partial Payments up to the Restorations and some Landscaping. The total amount is $135,683.09 (including the extra work needed). 2. Partial Payment Estimates and Extra Work – Herdegen (pgs. 63-66)
Engineer Herdegen stated there was some extra work needed including soil correction and aggregate at the Coffee Shop Parking Lot. Also the second request resulted from the Alleyway near the Bakery. They had to extend pavement near the Manhole, and extend the sidewalks to the doors on the north side of the building. This was to keep the water away from the building and promote drainage to the east. Thirdly, the sidewalk was removed near the Hair Salon. There was a misunderstanding between the Owner and the
Plans in what they were looking for. They installed a depressed curb to create easier
access, and the sidewalk needed to be brought up to grade at that time. The fourth and
final item was at the Coffee Shop Parking Lot, where an abandoned Water Service was
located in the middle of the north end of the Lot. The pavement had settled their
following the survey, and they added additional pavement for drainage all the way to the
curb.
John Nelson addressed Engineer Herdegen stating about a month ago, they had met
behind the Coffee Shop. They discussed the berm on the north side where the Control
Structure is located. It became very narrow…maybe (6) inches due to the Control
Structure taking up part of the space. At that time, Herdegen stated it would be no
problem filling with more dirt there. It has not happened.
Herdegen explained there is a limited amount of space where they can bring it in. If they
keep trying to build it up, they will keep chasing themselves going down the hill. If they
raise it one foot higher, then the grade will be coming down the hill onto the Nelson’s
property. He was told they have brought in as much as they could.
Nelson felt it is high enough, but the water will go down by the Control Structure. If
persons walk there, it will just become flat again. You need to build it deeper or thicker.
Herdegen will check further, and get more fill in there. He added it was designed so that
all the water will soak in through the Rain Garden, which has draintile and fabric
underneath it.
Nelson guestimated one bucket of dirt would probably work there. Also, he stated they
put wood chips in the Rain Garden…Herdegen stated they were made aware of that, and
it will be replaced. (Wood Chips will float if water is contained in the same spot.)
Herdegen stated they are recommending Partial Payment to Landwehr Construction in
the amount of $135,683.09 for Parking Lot and Street Improvements.
Motion by Flug, second by Schlumbohm, to approve Partial Payment to Landwehr
Construction in the amount of $135,683.09. Motion carried 5-0.

1. Update & Review – Brink/Wishy (pgs. 72-73)
Liaison Brink stated the Park Board has found a person to reside in the Norelius house in Allemansratt Park. He will be providing work in the Park in exchange for free rent. He will be paying his own utilities, and there will be a six month probation period, at which time it can be extended to a long term contract. He will be helping to clear Buckthorn, and other misc. things in the Park. The Park Board felt the exchange was pretty fair. Mayor Carlson questioned how this will work with the IRS? City Attorney Mattick stated they are working on the Lease right now…he had not thought of that, but the Tenant may have to report it as income. They are working on a Draft Agreement in terms of what types of jobs and labor he will have to perform. Wishy questioned if he would be covered under the City’s insurance if he were to get hurt while working in the Park? Mattick stated they are also looking into that at this time. One of the questions is, is he a Tenant or an Employee. The title would determine what things and language would apply. Mayor Carlson stated Volunteers are usually covered under the City’s insurance…it may be similar to a Pastor who gets a housing allowance as part of the compensation…it may change the basis on which we pay it. Mattick stated he would not be a Volunteer as he is contractually bound to do this. Mattick clarified they want to keep this as simple as possible, and right now they are trying to sort all of these things out. Basically the City is getting some labor, etc. without putting out a lot of expense. We do not want a situation that creates liability or monetary issues; they want to do this fairly simple and cheaply. Liaison Brink continued the Park Board is looking into a Community Garden on the City’s vacant lots on Newlander (between Akerson and Broadway, south of the old Panel Company). There is a gentleman that is willing to take this project on and be in charge of it. Brink stated an Eagle Scout is on his way to putting together the sign for Olinda entrance to Allemansratt Park.
Personnel Committee:

Wishy questioned if anyone had heard about the results of Karl Oskar Days. Olinger stated he had heard it went very well. Wishy commented our On-Sale Liquor Store is not the most attractive building in the world. The Liquor Stores do make the City a profit, so couldn’t we make that building look more attractive? That building is old looking, and we are a little derelict in not bringing our own building up to date. Olinger stated it is in the Budget for next year. Wishy added we have no signage on the Off-Sale Liquor Store on the north side of Hwy. 8. He felt they needed signage to draw from persons traveling west also. Olinger stated they have a sign on order at this time. Wishy also questioned the old antique Liquor Store Sign from the On-Sale. It is leaning and tied to the fence, but he would like to see that restored and put back up where it belongs. They do not make signs like that anymore. Olinger stated they researched it, and it will cost more to refurbish the old one than it would to purchase a new one. That is the question…do we want to spend more on fixing it up than getting a new one? The thoughts are the On-Sale will keep and fix the old one, and the Off-Sale will get a new one. Flug felt they had discussed and determined that before the construction of Hwy. 8 had started. It was in the way during construction, so they had to move it. Wishy asked what they would have to do with the old sign to restore it. Olinger stated it needs all new neon lighting. Wishy felt even if they get a new one, it would not have the same character as the old one has. He added it is a wonderful piece, and it has historical ties to Lindstrom. Flug agreed, and stated we need to get the estimate to fix it and get it back up. Wishy concluded we need to also fix up the building itself, and be proactive in cleaning up the aesthetics and buildings owned by the City. Mayor Carlson corrected the Calendar Date for the Police Commission is to be on August 14th at 5:00 p.m. CORRESPONDENCE:
ADJOURNMENT: