It’s Not Easy Being Green
Albatross, gadfly petrels, shearwaters, jaegers—what manufacturing problems, but it became available again in
birder doesn’t dream of seeing these marvelous and 1997 with the side-effect profile now being much more mysterious birds of the open ocean? And what is intimi- favorable. So if you tried the patch prior to 1994 and did- dating enough to keep even the most avid birder on- n’t like the side effects, it may be worth a try again. The shore? Seasickness! This is not without good reason. Be- most-common side effect is a dry mouth, which occurs ing seasick is a truly miserable experience, and it can in about two-thirds of the people who use it. Less-com- definitely curb one’s enthusiasm for pelagic birding.
mon side effects are drowsiness and a temporary blurring I give talks on pelagic birding, and when I’m done the hands go up immediately. The first question isn’t “How Dimenhydrinate and meclizine HCL are popular med- often do you see Laysan Albatross?” or “What’s the best ications readily available over the counter. They’re better time of year to see Flesh-footed Shearwaters?” The first known as Dramamine and Bonine, respectively, but you question inevitably is “How do you avoid getting sea- may see generic forms of these two drugs on the shelf in the drug store. Drowsiness is the most-common side ef- Weather conditions offshore can vary considerably, and even a slight variation in wind direction can make Another prescription-only medication is called “coast the difference between a smooth and a rough trip. Any- guard cocktail”, a combination of an anti-histamine and one can get seasick, even veteran skippers and enthusi- ephedrine; due to recent health concerns over ephedrine astic trip leaders. (The word nausea is derived from the in dietary supplements the cocktail is not currently Greek word naus, which means ship.) It resolves once you get onshore, but unfortunately that’s often hours Here are some important things to remember in regard away from the time you first get sick.
to taking medications. Some medications need to be tak- Seasickness certainly won’t kill you (even though you en before the trip. Scopolamine patches need to be put may wish it would), but if you do get sick, it is important on at least 4 hours before getting on the boat. It’s also im- to avoid dehydration (as well as the germs that you may portant to take any medication as directed, and to read get from kissing the ground when you return to shore).
through the side effects and warnings listed on the pack- Seasickness occurs when your brain perceives con- aging before you take it. For example, all of these med- flicting signals between what your eyes are seeing and ications caution against consuming alcohol while taking the drug, and they shouldn’t be used if you have prob- The side-effect profile for each drug is different, and 1. You’re afraid you’re going to get sick.
each drug affects each one of us a little differently. I’d 2. You’re afraid you’re going to die.
recommend that you try a new medication a few days 3. You’re afraid you’re not going to die.
in advance of getting on the boat to see how it affectsyou; it may not be the one for you. Some scopolamine All joking aside, it’s prudent to put some thought into users wear only half a patch at a time, to lessen side ef- preventative measures before you get on board; it is fects. Be sure to talk with your doctor or a pharmacist before you tinker with the recommended dose of any Michael Donahue
Acupressure
Medications
Acupressure is a popular alternative to medication. To control nausea and vomiting, pressure is applied to the inside of the wrist by wearing an elastic wristband with bumps on the inside. These bumps touch a pressure Many birders swear by scopolamine patches, which point and block nausea signals being sent to the brain.
are worn behind the ear. They are available only by pre- Wristbands are worn on each wrist, and they need to be placed correctly to be effective; directions are included For those who have tried scopolamine in the past and in the packaging. They are available in most drug stores have had a bad experience with side effects, there’s some good news: It was taken off the market in 1994 due to There is conflicting information as to the effectiveness B I R D I N G • D E C E M B E R 2 0 0 4 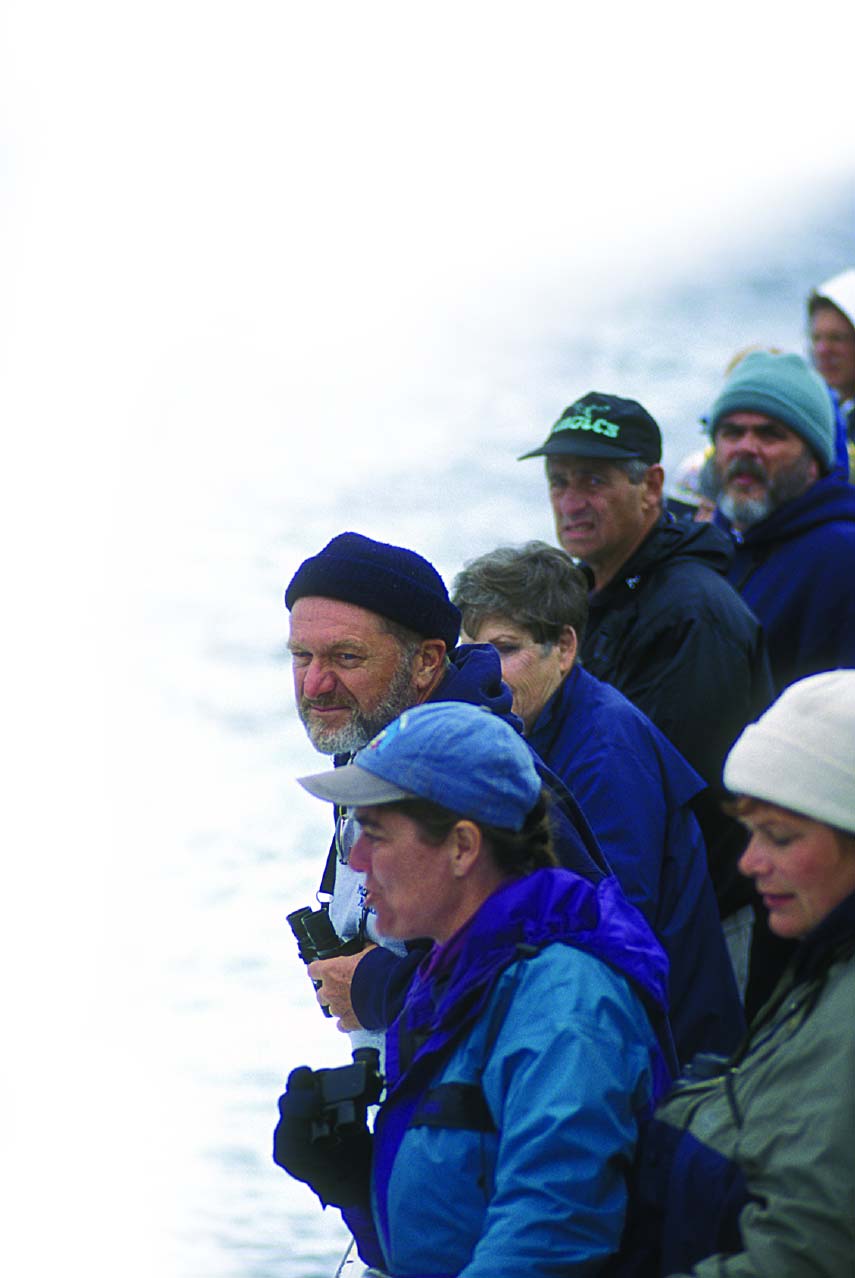 of acupressure. One study compared the wristband to a placebo 2. Get plenty of sleep the night before the trip.
and found no difference in incidence of motion sickness, but oth- 3. Dress warmly and comfortably, preferably in layers so that you er studies have demonstrated that acupressure can prevent nausea.
can adjust according to conditions. On summer trips into the Birders Alan and Wendy Roedell swear by the wristband. It has Gulf Stream, shorts and sandals may be the norm; but summer worked for them off the West Coast of the U.S., off the Galápagos, trips out on the Pacific Ocean can be quite cool.
and off waters that surely would test even the most robust of con- 4. Stay outside of the cabin, but avoid breathing the diesel fumes.
stitutions—those in the Antarctic.
Take deep breaths of fresh air. Look at the horizon.
There is also an electronic wrist band (called ReliefBand) that 5. Eat breakfast before you get on the boat. Those big hearty uses electronic signals to stimulate the nerves in the wrist. It is be- breakfasts sold in waterfront diners smell great, but you would lieved that these signals mimic natural nerve signals that interfere be best to avoid them and stick with something not so greasy.
with nausea messages being sent to the stomach. It was initially de- 6. Don’t be afraid to snack along the way—you want to avoid hav- signed to help manage morning sickness, but it has now been FDA- ing an empty stomach. Bagels, saltines and other crackers, and approved to treat motion sickness as well.
When Martin Meyers was sick on an overnight trip out of Santa 7. Keep in mind that you will use more energy during a day at sea Barbara, California, one of the staff on board came to his aid and than you would on shore; you will be using energy to help keep placed the wristwatch-like device on his wrist. Two to three minutes warm and to compensate for the movement of the boat.
later, he was feeling fine and back at the rail again. “Needless to say, 8. Stay hydrated. Try to drink at least as much as you would on a I ordered one as soon as I got home,” Meyers relates.
typical day. If you do get sick, make sure to drink plenty of flu-ids once you feel you can keep them down.
Herbal remedies
9. Avoid alcohol the night before the trip.
Of the herbal remedies, ginger is by far the most common. 10. Keep yourself occupied! If there isn’t a lot of bird activity, talk Many people like to snack on gingersnaps and drink ginger ale with the other birders on the boat. Birders are a friendly bunch while on the boat. Ginger root comes in candied, pill, and powdered and most of us would love to talk about birds. Many pelagic forms. (One advantage to ginger is that there are no side effects.) tour operators have field guides and reading material on board, As with acupressure, studies looking at the anti-nausea effec- but avoid reading while on the boat.
tiveness of ginger have been contradictory; some studies show thatginger provides no protection against seasickness; others have Finally, being well rested and keeping yourself as physically com- shown it to be just as effective as Dramamine. Either way, it’s rec- fortable as possible can make the difference between staying well ommended that you start taking the ginger supplements the night Don’t let the threat of seasickness keep you from heading off- The one consistent theme that I’ve found when talking to people shore. (Unless you’re Alan Grenon, who is staying onshore and about how they keep from getting seasick is that people find some- hoping for a medical breakthrough, all the while working thing that keeps them from getting sick offshore and stick with it on his eventual publication, Pelagic Birds from on subsequent pelagic excursions. Matt Bartel, after getting sick on Land, which he’s been researching for three his first trip, now relies on Dramamine and the wrist band. Con- decades.) Talk to your friends about what versely, Ted Floyd has found Dramamine to be useless but Bonine to be completely effective. Bill Shelmerdine relies on bonine and ginger ale. Bob Morse doesn’t take any chances at all and uses the wristband, scopolamine, and the coast guard cocktail. And onequeasily-inclined veteran seabirder, who asked not to be identified,“pops Dramamines until I rattle when I walk, then hop on board.” Modern medicine, superstition, the placebo effect, and a maybe bit of witchcraft all are techniques that pelagic birders use for man-aging seasickness. Tips to Avoid Seasickness
Honest!—it’s not allthat bad. Take your In addition to the medications, acupressure, and herbal remedies already discussed, here are additional tips to help you avoid the 1. First of all, once you’re on board, don’t think about getting sick! Seasickness is certainly a physical ailment, but don’t underesti- mate the psychological component. (For example, several times when I sat down to write this piece I got a little woozy and had to go take a break and get some fresh air.) Instead, think about all the great birds you are seeing, or will soon see! W W W . A M E R I C A N B I R D I N G . O R G