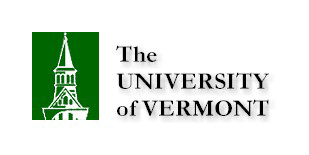 The Vermont Legislative Research Shop
Psychotropic Drugs and Children
What are Psychotropic Drugs?
A psychotropic drug is any drug capable of affecting a person's mind, emotions, and behavior. Psychotropic drugs work by changing some of the body's natural chemical levels and ratios; the change induced by these medications in the brain's chemical composition modifies human behavior (National Institute on Drug Abuse, 2002). Psychotropic drugs are most commonly used as part of a treatment regimen for mental illness; drugs prescribed to treat mental illness include types such as stimulants, antidepressants, anti-psychotics, mood stabilizers, and anti-anxiety medications (Nicely et al, 2002). A Trend of Increased Drug Use
Research released in January 2003 indicates that the number of children who are taking psychotropic medications more than doubled from 1987 to 1996 (National Conference of State Legislatures, 2004). Another study examined the rate of use by children in two states' Medicaid programs and a large, private HMO. They found that, in 1987, approximately 2.5 percent of children were taking at least one psychiatric medication, whereas in 1996, the rate jumped to 6.2 percent. One estimate is that six million prescriptions for Ritalin are filled annually (NCSL, 2004). Ritalin and Prozac are the two most commonly prescribed psychotropic drugs for pediatric patients. Methylphenidate is the active ingredient in Ritalin, which acts by stimulating the body's central nervous system (brain). In treating children with Attention-Deficit Hyperactivity Disorder (ADHD), Methylphenidate produces a calming effect, with favorable effects such as a reduction in hyperactive behavior and an improvement in the child's attention span. Methylphenidate was approved by the FDA in 1955, and has been prescribed with some frequency since the 1960s (MedicineNet.com, 2004). According to the 2002 Medco Drug Trend survey, prescription drug spending on children increased by 85 percent during the past several years (NCSL, 2004). Yet, even more surprising, spending on treatment of attention deficit-hyperactivity disorder (ADHD) increased by 122 percent. Overall, boys continue to be prescribed psychotropic drugs more than young girls, yet the use of these drugs by girls is on the rise (NCSL, 2004). Notably, children with Medicaid coverage were more likely than children with private HMO coverage to receive anti-psychotics and mood stabilizers, drugs that are very potent and have dramatic effects on a person's behavior and sometimes serious side effects too (NCSL, 2004). Examples of anti-psychotics include Zyprexa, Haldol, and Risperdal; mood stabilizers include drugs such as Tegretol, Depakote, and Lithium (American Academy of Child and Adolescent Psychiatrists, 2002). These trends pose a new set of challenges for health science researchers, policymakers, medical professionals and parents; such as, what is the increased usage and reliance upon psychotropic drugs indicative of? Perhaps there is a notable increase due to a lessening of the cultural stigma associated with mental illness, thus making it more acceptable for children to undergo evaluation and possible treatment for their mental health problems (AACAP, 2000). In addition, research has surged in the area of psychotropic medications, with the effect of practitioners learning more about how to treat children, as well doctors now have more medications in their arsenal to treat children with (AACAP, 2000). One negative aspect of increased research of psychotropic medications in pediatric patients may be that increasing prescription rates could be in-part due to aggressive marketing by pharmaceutical companies. Furthermore large advertisement campaigns popularizing and familiarizing parents with medications entice them to request medications for their children with greater frequency, which may result in physicians relying on pharmacological therapy as the main component of a young patient's treatment (NCSL, 2004). A possible trend may arise where doctors are promoting medication at the expense of therapy (family therapy, play therapy, music therapy, or psychotherapy); a trend that would likely be supported by insurers if it proved to be most cost-effective for the insurance companies (NCSL, 2004). Psychotropic Drugs in the School Environment
The school environment plays an important role in monitoring the healthful development of children; school personnel are able to view a child's development and behavior in a variety of situations; such as, classroom learning and social interaction with their peers. Teachers can play a crucial role in helping to identify children who may need to be screened for a condition like ADHD (AACAP, 2000). A disruptive child not only hinders his or her own learning, but their disruptive behavior affects the quality of a learning environment for other children also. Considering that it is estimated that 3-5% of school-age children have ADHD, it is likely that most teachers have one or more students with the disorder in their classes (AACAP, 1999). For some problematically disruptive students Ritalin has a positive therapeutic effect. However, some parents and educators are concerned that medications such as Ritalin are becoming fall-back solutions for school personnel to facilitate classroom function and easily control disruptive children. For some children with ADHD, Ritalin or similar psychotropic drugs are the appropriate treatment for them, but disruptive behavior is not only caused by 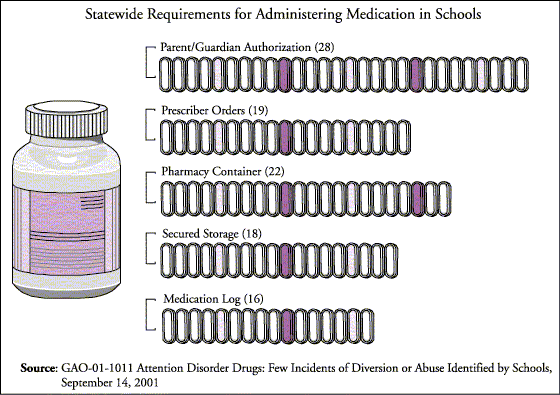 ADHD. Automatically prescribing Ritalin for all children who exhibit such behavior is only masking the problem, rather than addressing the cause of their disruptive behavior. For whatever reason school children are being medicated, a problem arises if schools set attendance conditions for these children on the basis of taking psychotropic drugs in order to attend school. Concern arises over whether schools will push medication rather than provide specialized educational services for needy students. A related concern regarding psychotropic drugs in schools concerns the safe keeping of medication at school. Central Nervous System stimulants like Ritalin and Adderall have a relatively short therapeutic effect, usually 4-6 hours (AACAP, 1999). This means children taking these drugs typically have to take at least one dose while at school. Furthermore, recreational drug use of such stimulants occurs, and school nurse's offices need to have a safe method of storing and monitoring stimulant medication administered. However the concern over the safekeeping of psychotropic drugs is over-stated according to a 2001 General Accounting Office (GAO) report (NCSL, 2004) What is being done to regulate Psychotropic Drugs?
In an attempt to address these concerns, the Department of Health and Human Services (HHS) has required testing of some commonly prescribed psychotropic drugs for use in children (NCSL, 2004). Earlier this year, Prozac was approved by the Food and Drug Administration (FDA) to treat depression and obsessive-compulsive disorder (OCD) in children between the ages of 7 and 17. Prozac is the first selective serotonin reuptake inhibitor (SSRI) to receive approval for treatment of depression in children (NCSL, 2004). The National Institutes of Health now requires that children be part of all their clinical trials, unless there is a valid reason not to include them. The NIH has also established several multi-site trials to facilitate pediatric testing. To encourage further research, the FDA even offers financial incentives; it will extend the patents of drugs by six months if the pharmaceutical company conducts pediatric studies with them (NCSL, 2004). Psychotropic Drugs in Vermont
A study conducted by the Food and Drug Administration (FDA) compared per capita use of methylphenidate (Ritalin) in each state. One finding by the FDA found that Vermont had the third highest consumption of the drug in the nation. Specifically, Vermont uses 6,268 grams of methylphenidate per 100,000 of the population, while the national average for methylphenidate consumption per capita was 4,155 grams per 100,000 population (FDA, 2003). Current Vermont House bill “VT HB 706” and Vermont Senate bill “VT SB 30” are in regards to psychotropic drug policy in Vermont schools. How Other States are Regulating Psychotropic Drugs in Schools
Many states have become concerned with the increased use and potentially harmful effects of psychotropic drugs on children. To address this concern, legislation restricting or prohibiting the use of psychotropic medications for children has and is being considered at the state and federal level. As of October 2003, twenty-six states had proposed legislation regarding psychotropic drugs and children (AACAP, 2002). The majority of the legislation entails the prohibition of school employees from requiring a parent or guardian to administer or consent to the administration of psychiatric medication in order to attend school. Some proposed bills also further prohibit the recommendation by a school employee of psychiatric or psychological evaluation of a child. Colorado and Texas both passed legislation, which establish academic solutions as favorable to psychotropic drugs for handling behavioral and learning problems. Michigan and Rhode Island forbid administration of a psychotropic drug as a requisite for school attendance (AACAP, 2002). The following graph illustrates the type of legislation adopted by each state though the years 1999-2002. Legislation:
Psychotropic Drug and/or Psychological WI Evaluation of Student Table 1: Legislation Regarding Psychotropic Drugs Across the States Alternatives to Psychotropic Drugs
There are certain alternatives to psychotropic drugs for parents to consider. Herbal remedies such as gingko biloba, valerian and passionflower are some options, evening primrose oil and certain fish oils also may help to balance out depression. However, herbal remedies may be equally controversial as psychotropic drugs, since there is no FDA regulation of or accurate labeling practices for herbal remedies. A non-medicinal alternative is EEG Biofeedback. This is a learning strategy that allows a person to modify their brain waves. Utilizing this brain exercise, one may treat conditions and disabilities in which the brain does not function optimally. Biofeedback has proven effective in treating ADD, conduct disorder, depression and anxiety; conditions which psychotropic drugs are commonly prescribed (American Psychological Association, 2004). Works Cited
American Academy of Child and Adolescent Psychiatrists “AACAP State Parity Update”, http://www.aacap.org/legislation/Parity.PDF October 2002; Site visited 4/21/04 American Academy of Child and Adolescent Psychiatrists “Psychiatric Medications for Children and Adolescents Part II: Types of Medications” http://www.aacap.org/publications/factsfam/29.htm February 2000; Site visited 4/26/04 American Academy of Child and Adolescent Psychiatrists “Children Who Can’t Pay Attention/ADHD” http://www.aacap.org/publications/factsfam/noattent.htm Updated May 1999; Site visited 4/26/04 American Psychological Association Online “Archival Description of Biofeedback: Applied Psychophysiology” www.apa.org/crsppp/biofeedback.html (2004); Site visited 4/26/04 American Psychological Association “Psychotropic Drug Use in Young Patients is Rising” http://www.apa.org/monitor/apr03/druguse.html April 2003; Site visited 4/21/04 Littell, Mary Ann “Psychotropic Drugs and Children” University of Medicine and Dentistry of New Jersey (UMDNJ) Magazine, http://www.umdnj.edu/umcweb/hstate/winter_spring01/features/feature03_psychotropic.
htm Spring 2001; Site visited 4/26/04 MedicineNet Online Dictionary http://www.medterms.com/script/main/art.asp?articlekey=30807 Updated and Reviewed 2/17/04; Site visited 4/26/04 National Conference of State Legislatures, (Vol. 3, No. 3) “Psychotropic Drug Use Among Children.” http://www.ncsl.org/programs/health/forum/shld/33b.htm Site Visited 4/19/04 National Conference of State Legislators, “Psychotropic Medications at Schools” http://www.ncsl.org/programs/health/ritalin.htm April 1, 2004; Site visited 4-26-04 National Institute on Drug Abuse “NIDA Fact Sheet: Methylphenidate” http://www.nida.nih.gov/Infofax/ritalin.html June 25, 2003; Site visited 4/26/04 National Institute on Drug Abuse “Prescription Drugs—Abuse and Addiction” http://www.nida.nih.gov/ResearchReports/Prescription/Prescription.html October 21, 2002; Site visited 4/26/04 Nicely, Starr L. BS and Sue Tolleson-Rinehart, PhD “UNC CERTs Finds that Psychotropic Drug Use in Children is on the Rise” http://www.certs.hhs.gov/newsarchive/2002/20020430_01.html April 30, 2002; Site visited 4/21/04 Prepared by Hayley Block, Michelle Dube, and Lauren vanderKeyl on April 26, 2004 under the supervision of Professor Anthony Gierzynski. This report has been prepared by undergraduate students at the University of Vermont under the supervision of Professor Anthony Gierzynski. The material contained in the reports does not reflect official policy of the University of Vermont.

Comments: This is the personal story by one of my corporate clients in California about her son’s experience with the antibiotic Levaquin. I’ve had more than one personal report about the severe side effects of this medication. On July 8th 2008, the FDA issued a “black box warning” alert on this medication along with other fluoroquinolone drugs like Cipro, Levaquin, Avelox, Noroxin and