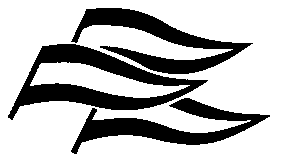 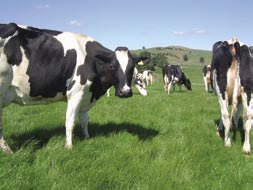 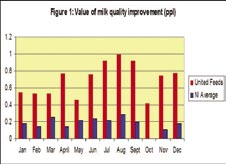 Feeding for Improvement
By Kieth Agnew, United Feeds
Some years ago dairy farmers looked forward to turnout as a time when milk yields rose because of the access to an abundant supply of fresh grass. Nowadays many dairy farmers dread the change to grass because their feed management in winter is so good that turnout, if not properly managed, can result in lower yields and a reduction in milk quality and poor fertility. With milk price on the rise this year, as we move into the spring period, it is essential to plan your turnout strategy and summer feeding to take advantage of this situation. The current shortage in global milk supply means that producers should be aiming to maximise milk production and quality, while also keeping a focus on maintaining good health and fertility. MAXIMISING MILK QUALITY
Over the last few years, United Feeds have been focused on a
number of research and development projects to increase the milk
quality on Northern Ireland farms. The initial project provided
Cream Maker rations or feeds containing the protected fat, Bergafat, producers with the ﬁrst effective method of improving milk fat have reported that cows held condition much better during the content through the use of Cream Maker rations. grazing period and that fertility performance had improved.
The improvements, in terms of improved milk value, from farms Recent US research has conﬁrmed these observations. Studies using these Cream Maker rations compared to the improvement showed that cows fed the fat supplements had a pregnancy seen in the Northern Ireland average over the same period are rate of 63% compared to only 40% in the control groups. The shown in Figure 1 below. As can be seen, the increase on the improvement was due to the production of larger ovarian follicles farms working with United Feeds has been 3-4 times greater than These improvements are available to all dairy farmers through United Feeds. Unlocking the potential of your herd, is in your control. Take the ﬁrst step and contact United Feeds on 02890 759000.
THE PROVEN SILAGE PIT PRODUCTS
RESURFACING
RESINSYSTEMS
The focus of research and development has now shifted to improving milk protein content on Northern Ireland farms, with the introduction of the Protein Maker range of rations. Further work is planned this summer to examine if milk protein content can be increased during the grazing season, and further improve the value of milk.
MANAGING FERTILITY
Improving output from the dairy herd must be the aim of all
producers, but this improvement must not be to the detriment of
the cow’s health or fertility. Fertility is of major concern on most dairy farms in N. Ireland during the spring turnout period.
There is no doubt that the change in forage type, availability of grass (especially this year) and poor weather conditions can result in a drop in feed intake compared to the winter, leading to a period of excessive loss of body condition and poor fertility performance. The use of buffer feeding during the summer period has proved very effective for some herds in maintaining intakes and body condition. However, the use of the correct ration at grass can also help maintain good fertility performance. Producers who have used