It is time for the quiet specialty to become louder Professor Anthony Zietman is a British born Radiation Oncologist working in Massachusetts, USA. As the Associate Director of the Harvard Radiation Oncology Residency Program, Professor Zietman provides clinical management of patients and is heavily involved in research as well as training the radiation oncologists of tomorrow. Professor Zietman was an international guest speaker at the recent RANZCR 2013 Annual Scientific Meeting in Auckland, where he kindly stopped to speak with Radiation Oncology Targeting Cancer. Cancer treatment is largely based on three pillars: surgery, radiation therapy and chemotherapy. Surgery is often seen as a self-evident cancer treatment method and the public rarely demand justification of it. In the public psyche, chemotherapy is strongly associated with cancer care, despite having relatively low cure rates. Radiation therapy however often goes unnoticed. “Radiation therapy has always been the quiet specialty. It exists under the ground literally and metaphorically, in shielded bunkers. The machines are so heavy that they can’t be on the top floor - they need to be in the basement. But I think it’s time we told the story of radiation therapy.” “I think medical oncologists have done a far better job than we have of taking ownership of this disease publicly.” On top of a lack of promotion from within the field, Professor Zietman speculates that sheer numbers are also a contributing factor to the low profile of radiation therapy. “There are simply less radiation oncologists than there are surgeons and medical oncologists, so we lose out on numbers and our voices can’t be heard as easily. There are also far more drugs on the market than there are device manufacturers.” In spite of its low profile, Professor Zietman says there is a vast evidence base that shows radiation therapy delivers strong clinical outcomes in a cost effective manner. He believes that it is a good treatment option either alone or in combination with surgery or chemotherapy. 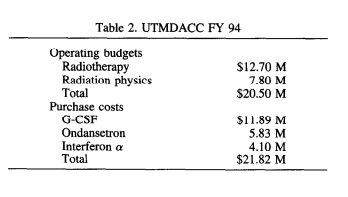 “The gold standard [to demonstrate efficacy] is a randomised control trial where you literally flip a coin to decide which treatment is given. It’s a hard study to do from an ethical point of view, but it was done in the early days for breast cancer, in the 1970s in Italy. It was proven that the radiation patients did just as well as surgical patients. The studies were simply so large they couldn’t be refuted.” Radiation oncology is often perceived as an expensive treatment option due to the large investments required to establish treatment centres. However, the vast numbers of people successfully treated by radiation therapy over time make it hugely cost effective. He cites an ASTRO address by Professor Lester Peters in 1994 as an example of this. At the time, Professor Peters was based at the MD Anderson Cancer Centre in Houston, Texas. “He pointed out that the entire cost of running their radiation therapy department for a year was less than for three drugs that the medical oncologists used – an anti-emetic*, a bone marrow supporting agent** and interferon***. The three of those don’t cure a single patient, yet their combined cost was more than the entire radiation oncology department. It’s a shocking statistic.” Comparison of MD Anderson Cancer Care Centre spend (1994) for Radiation Oncology and 3 drugs1 “I think a lot of us have trusted that the evidence surrounding radiation oncology will speak for itself, but it turns out it’s a more complicated world than that. There are screaming voices from television and the internet that drown our evidence out.” “There has been an explosion of technology in radiation oncology over the last ten years – cyberknives and proton beams and so forth – which are fantastic advances that people should be aware of. But we can’t just wait for the evidence to speak for itself, we know that doesn’t work. We need to champion the evidence and promote our field.” 1Peters, L. Through a glass darkly: Predicting the future of radiation oncology. International Journal of Radiation Oncology Biology Physics. 1995 31(2) 219 – 225 *Ondansetron is an anti-emetic (anti-nausea and vomiting agent) **G-CSF is a bone marrow supporting agent that stimulates bone marrow to make white blood cells. It is used to counteract the drop in white blood cells caused by chemotherapy ***Interferon stimulates the body’s immune system

Use of polyphosphate accumulating organisms (pao) for treatment of phosphate sludge