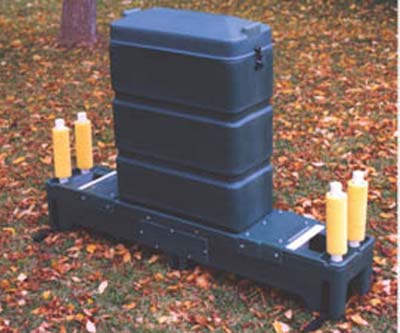 FREQUENTLY ASKED QUESTIONS
Ticks are the Problem
1) What other animals frequent the devices?
by the Shelter Island Deer and Tick Committee
Raccoons, squirrels, mice, chipmunks, turkeys, blue jays and other birds frequent the device. Hundreds of hours of 24-hour infrared videotape recordings documented by the ARS indicate that besides the deer, rac- coons are the only animals to contact or rub the treated rollers. Because raccoons are also good hosts for ticks, those raccoons that do receive suffi cient treatment will also kill appreciable numbers of ticks.
2) How do we know how much corn a deer will eat?
The devices are intended to ‘bait’ the deer and not ‘feed’ them. For that
reason only clean whole kernel corn should be used for bait. Several
studies have shown that, in the presence of abundant natural browse,
corn is a self-limiting diet for white-tailed deer. Thus, when an abun-
dance of other natural food is available, a white-tailed deer will eat
The population of ticks on Shelter Island has greatly increased in recent approximately 1 to 1 1/2 pounds of corn per 100 pounds of body weight years causing a lot of serious illnesses in people of all ages. Tick popula- tions of both the lone star tick and the blacklegged tick, previously called the “deer tick,” continue to spread throughout much of the country. As 3) Is the pesticide permethrin dangerous?
tick populations increase so does the occurance of tick-borne infections Permethrin is approved by the EPA for use on beef, dairy cattle and affecting humans. Most of these diseases are carried by species of ticks swine; it is used in shampoos to treat lice on humans and for fl eas and which feed on deer, such as the lone star and the deer tick. The deer tick tick on pets. It is in sprays to apply to clothing for use as a tick repellent. is primarily found in the woods where it waits on leaves or brush for its Permethrin has been classifi ed by the EPA as a ‘caution level’, the least host to brush up against before it attaches to the host. The lone star tick, toxic of all pesticides. As with any pesticide, care must be taken in its relatively new on Shelter Island, can live in the woods or lawns. The lone star tick is much more aggressive than the deer tick and will track its host up to 30 feet. Tick-borne disease is a costly problem and one published study has estimated that Lyme disease alone may cost society over two billion dollars a year. It is now clear that controlling the tick population is by far the most effective way to reduce human tick-related illnesses.
This informational fl yer has been written and distributed by the www.shelter-island.org/deerandtick/ 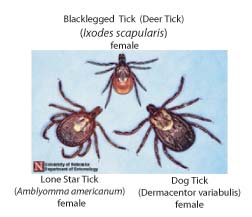 HERE’S HOW SHELTER ISLAND CAN GREATLY
hunters and hikers which contains (.5%) Permethrin. Military uniforms REDUCE TICK-BORNE DISEASES
are often treated with (1%- 40%) Permethrin to protect our soldiers from The Shelter Island Deer and Tick Committee was appointed to study the problems of tick-related diseases. This committee has determined that Children’s heads are washed with a (1%-5% ) Permethrin-based the tick-borne illnesses on our island can be dramatically reduced by re- ducing the tick populations. One way to do this is by using the ‘4-Poster’ Permethrin is applied monthly to the necks of dogs to protect from baiting stations to treat the deer with Permethrin, which will kill ticks on Many homeowners have hired companies to spray their individual properties for ticks using Permethrin. Spraying adds more Permethrin THE ‘4-POSTER’
to the environment than does the targeted application of the ‘4-Poster’. The ‘4-Poster’ device is specifi cally designed to kill species of ticks If the ‘4-Poster’ System is implemented and successful, then spraying that feed on white-tailed deer. In this regard, two primary target species of properties to eradicate ticks may be greatly reduced or no longer be for ‘4-Poster’ technology in the U.S. are the (1) black-legged tick (deer tick) that transmits agents causing Lyme Disease, human granulocytic Some of the hunters have raised questions about the safety of the meat ehrlichiosis (HGE) and human babesiosis, and (2) the lone star tick of a treated deer. The Permethrin treatment is not known to permeate that transmits the agent causing human monocytic ehrlichiosis (HME), the hide of the deer, it stays on the fur and skin. The DEC recommenda- as well as a newly identifi ed Southern Tick Associated Rash Illness tions for skinning deer should be followed which includes the practice of (STARI) that has symptoms like Lyme Disease.
The ‘4-Poster’ consists of a central bin containing clean whole kernel corn used as a bait and 2 sets of applicators located at each end of each THE NEW YORK DEC
feeding station. As deer feed on the bait (corn), the design of the device At this time, the New York State Department of Environmental forces them to rub against Permethrin-impregnated applicator rollers that Conservation (DEC) has not given approval to the use of ‘4-Poster’deer look similar to paint rollers. The applicators in turn apply a 10% Perme- feeding stations and Tickicide for two reasons. The DEC has made it thrin product, Tickicide, to their ears, heads, necks, and shoulders where illegal to feed deer because they are concerned with the spread of illness most of the feeding adult ticks are attached. This is extremely effective within the deer herds and because they have not yet approved the use of because almost 95% of the female adult ticks take their blood meal on a the Permethrin on the deer. New York State happens to be the state with deer prior to laying their eggs. The Northeast study shows that if the lone the most cases of tick-borne diseases and the only state in the lower 48 star or deer ticks can be killed on the deer at this point in their life-cycle, that does not allow the ‘4-Poster’ system. The Deer and Tick Commit- then 86 to 99% of these ticks could be killed over a 3 to 4 year period.
tee believes that the methodology developed for the ‘4-Poster’ system is The Deer and Tick Committee is recommending the use of ‘4-Posters’ valid and a safe and appropriate response for tick-borne disease reduc- across the island in order to rid this island of ticks and debilitating tick- borne illnesses. If this system is used, a licensed and trained individual would maintain the ‘4-Poster’ stations. There would be approximately one ‘4-Poster’ baiting station for every 50 acres or approximately 100 ‘4-Posters’ placed on the island. Each ‘4-Poster’ would be attended to at least weekly.
PERMETHRIN
Permethrin is a very effective pesticide against lone star and black-
legged ticks and when used properly can reduce tick numbers drastically.
Some of the other uses for Permethrin and the strengths are:
The State of New York has approved (10%) Permethrin to be used
in baths for beef cattle even on the day of slaughter and for dairy cattle
even when they are being milked.
Orvis is only one of several companies that offers outdoor clothing for

Position Statement A Response to CCHR’s “Psychotropic Drugging of Florida’s Medicaid Children” In 2006, the Citizens Commission on Human Rights (CCHR) developed and distributed via the internet a white paper entitled “The Psychotropic Drugging of Florida’s Medicaid Children” 1. First, critical thinking and fair- mindedness necessitate that one examine the potential bias