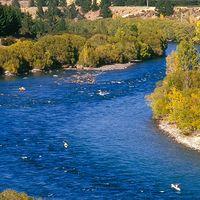 Craig Phillips – Goldrush 2008, Central Otago Another mint weekend for Goldrush this year & everything went pretty smoothly for us old farts – team ‘NotJust40′ ( …we’d rather optimistically called ourselves ‘Just40′ the year before). After a re-reading of river conditions and a last-second switch in boat, Ian Huntsman carved up the 1st paddle with 2nd fastest time overall to start me on my mtb leg near the front of the field. For uncertain reasons I had really sore legs, but settled ok into the long climb which was into a strong NW headwind again. Was 1st to the end of the mtb & ended up with 2nd fastest time overall, 22s behind a guy in open teams, but around 6 mins slower than my time last year, possibly due to a stronger headwind, more closed gates, as well as my weird legs. Andy then had a great run to the end of Day 1 at upper Mannorburn, and also got inside the top 10 time overall, which had us in 1st place in vet teams & 3rd overall. I resorted to paying $20 for a massage to try to get my legs going for the next day! Plan was for Andy Evans to do the first 2 stages (mtb and road), then for Ian to do the run, so I could be fresh for the last stage mtbing over Thomsons Track which seems to a key make-or-break stage of the race. (Last year I’d cracked badly on this stage after going too hard on the first mtb, & we thereafter had to work hard to defend our lead). Andy had a great ride on my Santa Cruz Blur XC & probably would have got 3rd overall if he hadn’t punctured (my brand new Conti Supersonic from Hub Cycles), but still pulled off a fast repair to finish 16th overall, only a touch behind the team that was chasing us for 1st in vet teams. He then soldiered through the 40 min road ride, and Ian (our specialist kayaker) had a great run, finishing inside the top 20 overall! I had a demon to excise on the Thomsons mtb and finished inside 2 hours, 40 mins faster than last year (at least 15 mins of this due to the lack of headwind this year), again 2nd overal , and about 24s behind a rider in mixed vet teams; I’d passed him in the hil s, but afterwards he’d out-powered me in he last 20km of flat roads. Despite getting beaten I was fairly happy with my ride and doubt there was much more I could have done on the day to have pulled back that 24s. End of day 2, we’d opened the gap on 2nd vet team to over an hour, and were about 7 mins ahead of 4th overall, but 15+ mins behind 2nd. I spent another $20. I started with the Tarras-Hawea road stage (c. 40km) on my Ibis Silk where we were sent out in waves of I think 8 riders, 1 min apart. Our wave shared the work, but no one was going hard-out, and 3 of us eventually broke away on a short climb about 2/3 through the stage, then worked together to increase the gap, and we finished with 22nd fastest time overall. Ian then had a total blinder of a paddle to be first to the finish of the paddle (fastest overall) to set me away at the front of the field on my first **jog** since Goldrush 2007 (ouch)! A dose of voltaren saw me to the end of that nightmare, and then onto the road bike for the next 48 km stage. I wasn’t sure how far behind the next rider would be so started spinning at 80% to see if anyone nearby would catch me to help with the work. After about 10km I was joined by the mixed vet rider I’d met the previous day on Thomsons Track who was now amping to make up the 4 mins his team needed to take 1st in mixed vet. He and I worked together, then at about 25 km a guy on a time trial bike caught us, towing the 1st individual (Dougal Allan) in his breeze. We all took laps until TT-guy successfully attacked with about 15 km to go, leaving the 3 of us to slog it out. I was the only one without aero bars and was working hard on the downs and flats just to keep up, and found it best to take my laps on the ups. For the last 5 km our mixed-vet-machine had the hammer down & I was seeing double just staying on, while Dougal the individual who had done the whole race by himself seemed much stronger – legend! We finished the ride with 12th fastest time overall, and our mixed vet rider had gained the 4 mins needed to put his runner’s nose in the front of their category. Andy took off for his run for our team, again pulled out a swift one, and by the end of the day we had consolidated 1st vet team & 3rd overall. Our mixed vet’s runner couldn’t hold on, however, and his team came 2nd in mixed vet by 20s! Dougal Allan won 1st individual and was 7th overall, so watch that space in future multi sport/adventure racing. I still can’t walk properly after that run, but can’t afford another $20…