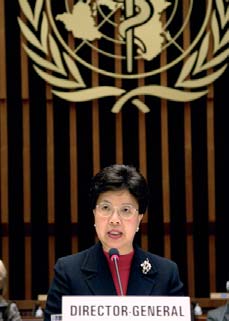 Correspondence
The WHO Director-
sector and those in the intersectoral Prevention of
General election ﬁ nale
cardiovascular disease
Margaret Chan’s election as the the UN family with the legitimacy with a polypill
Director-General of WHO (Nov 18, and mandate, WHO should exercise
p 1743)1 raises the question of whether
its interorganisational might to Thomas Gaziano and colleagues she can deliver in this role. In the improve cooperation in areas (Aug 19, p 679)1 report on the Lancet debate between candidates2 such as joint donor assistance, the usefulness of a multidrug regimen for she came through as someone multilateral sector-wise approach, prevention of cardiovascular disease cautious, yet keen to use the potential of corporate skills and the power of initiatives in WHO and other partner we disagree with the drugs chosen to communication. However, it is her organisations, the United Nation’s treat hypertension and to the overall pledge to champion the Bangkok Disaster Assistance Fund, health- Charter for Health Promotion that security-related issues, outbreak Gaziano and colleagues justify the pitches her against a broad range situations, and disasters. Recent use of a calcium-channel blocker in of objectives; achieving these will examples of disasters, including the treating hypertension by referring to necessitate ensuring the success of 2005 earthquake in Pakistan and the ASCOT-BPLA trial2 which showed WHO’s ongoing global programmes the post-conﬂ ict situations in Iraq that an amlodipine-based regimen with time-bound targets, such as and Afghanistan, emphasise the (amlodipine plus perindopril) was more polio eradication, as well as its County value that WHO can bring to such eﬀ ective than an atenolol-based one Cooperation Strategy benchmarks. arrangements and the acceptability it Given that these hinge on complex has in that role.
Finally, WHO should create the for the drugs chosen for treatment right intraorganisational synergies to comparison.3 As an additional criticism, First, the question of prioritising garner the support of countries that even though a possible beneﬁ cial the sensibilities of the government wish to engage in the normative and eﬀ ect of the calcium-channel blocker over the wellbeing of people standard-setting terms and assist regimen might be assumed, it would is crucial. Extrapolated to the others that need to be supported be marginal, because the estimated constitutional context “the organ- technically, thus creating options for number of patients needed to treat ization shall not seek or receive country engagement. A radical reform to address these about 1000. We wonder why, in a cost- issues seems daunting in view of controlling health policy, a thiazide organization”, this will entail going the vulnerabilities that resource diuretic was not included. Since there beyond involving international civil constraints bring in their wake. is no evidence to support a greater society and calls for redefinition Ultimately, it might also be a eﬃ of the intergovernmental agency question of prioritising long-term over thiazides, use of a diuretic instead prerogatives in view of the under- strategic choices over short-term of a calcium-channel blocker would gains. The key to the former is cost 10–20 times less.4 WHO’s structure; this will necessitate ments in health is changing as the drawing more than just the ﬁ ne line centred on a multidrug regimen and not environment gets dominated by between being political, which WHO on a smoking cessation campaign. The market dynamics with liberalisation needs to be, and being politicised, importance of smoking in determining of services traditionally in the public which WHO cannot aﬀ ord to the cardiovascular risk proﬁ le in lower domain. WHO will have to broaden become.
its focus outside the traditional I declare that I have no conﬂ ict of interest.
[email protected]ﬁ le.org
care provision, rather than in the Heartﬁ le, 1 Park Road, Chak Shahzad, Islamabad, Submissions should be
The Lancet. WHO 2007–12: the era of Margaret made via our electronic
Chan. Lancet 2006; 368: 1743.
mortality such as those related to submission system at
Brown H. WHO’s Director-General candidates http://ees.elsevier.com/
respond. Lancet 2006; 368: 1225–28.
thelancet/
We declare that we have no conﬂ ict of interest.
www.thelancet.com Vol 369 January 20, 2007

Lundquist Research Series – Wikipedia Apple Does it Best on Wikipedia New research finds Apple’s Wikipedia page is the most complete and easily consultable among the world’s largest 500 listed companies. The research conducted by Lundquist also shows that to improve their online presence companies must engage with Wikipedia, not back away as is often assumed. Milan, 17 February