synonymous names of the species:
the first name in each species list is the current and synonymous name used by the name in bold type occurring within each species list indicates the plant name used within these documents, which is also the name provided in the southern Arizona NPS exotics database ‘soaraz~1.xls’ (Holden 1996). Osteospermum sinuatum (D.C.) Norl. Dimorphotheca sinuata D.C.
other names found: Dimorphotheca aurantiaca species taxonomy

gynoecium: ray flowers with style divided into two long stigmatic branches. Disc
flowers with style divided into two short stigmatic branches. androecium: anthers with ovate or triangular-ovate tips, sagittate at base, short-tailed.
fruit: achenes of ray flowers 3-angled to subterete, 0.2 in. (4-5 mm) long, usually
wrinkled or tuberculate. Achenes of disc flowers flattened, 0.1-0.3 in. (6-7 mm) long, obovate, smooth, winged or thickened margins, no pappus. taxonomic glossary (Harris and Harris 1997):
acuminate: tapering to a sharp point
campanulate: bell-shaped
dentate: toothed along the margin, the teeth directed outward rather than forward (serrate)
lanceolate: much longer than wide; with the widest point below the middle
oblanceolate: inversely lanceolate, with attachment at the narrow end
obovate: inversely ovate, with attachment at narrow end
obtuse: blunt or rounded at the apex
ovate: egg-shaped outline, with attachment at broad end
peduncle: the stalk of a solitary flower or of an inflorescence
perfect: having both male and female reproductive organs
petiole: leaf stalk
pubescent: covered with short, soft hairs
sagittate: arrowhead-shaped with the basal lobes directed downwards
scarious: thin, dry, and membranous in texture, not green
sessile: attached directly, without a stalk
sinuate: having a strongly wavy margin
sub-: meaning under, slightly, somewhat, or almost -
terete: round, in cross section
tubercle: a small tuber-like swelling or projection
tuberculate: having tubercles
image of plant

Although there are many plants in the desert that are early blooming and daisy-like, African
daisies/Cape marigolds are one of the earliest bloomers, salmon colored to yellow to orange, and seemingly have no other species that it would be readily misidentified with during its biology

growth and reproductive strategy:
Dimorphotheca sinuata germinates following sufficient rains in the fall and winter and into spring (van Rooyen et al. 1992a, 1992b). Over the winter the plant grows vegetatively, adding biomass. Flower initiation occurs after a drop in temperature during the winter (vernalization) with flowering usually occurring in the spring after temperatures have begun to rise (van Rooyen et al. 1991, Steyn et al. 1996). Typical of annual plant strategies, Dimorphotheca sinuata completes its life cycle during favorable environmental conditions and the species survives stressful environmental conditions (i.e. drought and heat) as a seed (van Rooyen et al. 1992b). This species showed a dependence on insect pollination for cross-pollination and successful seed set. Self-compatibility systems were operative, but self-pollination is avoided in this plant by protrandry (maturity of male reproductive system before maturity of female reproductive system) (Ueckermann and van Rooyen 2000). Dimorphotheca sinuata produces dimorphic fruits (two different achenes/seeds). These achenes/seeds are morphologically and anatomically different, with each having different responses to environmental conditions, ensuring species' survival in stressful climates (Beneke et al. 1992a, 1992b, 1993a, 1993b, 1993c). no sources found for potential number of seeds/plant. Beneke et al. (1993a) reported that disc achene: ray achene ratios changed for plants growing in different localities Seeds tend to drop from the plant as soon as they are mature (Knowles et al. 1965). Achenes of the disc flowers are winged, having better dispersal mechanisms than achenes of the ray flowers, which are non-winged (Beneke et al. 1993b). Bass (1977) reports on laboratory germination and longevity tests of crop seeds of Dimorphotheca sinuata. He found when seeds of various ages were germinated at 59°F (15°C) in germination blotters, germination ranged between 54-73% for seeds less than a year old, 71-84% after 6 years of storage, 71-84% after 11 years, 71-80% after 16 years. Seeds were stored at 41°F (5°C) and at 40% relative humidity. (He reported that reduced germination in the trials of the seeds less than a year old may have occurred because those achenes were not processed to remove non-filled fruit as the achenes of older stock were, or the seeds were potentially dormant). Bass also referred to a past paper, Bass et al. (1967), in which storage conditions were tested. It was found that storage environment had an impact on Dimorphotheca sinuata seed longevity. Some horticultural sources report that seeds from this plant have ecology

origin and history of introduction:
Dimorphotheca sinuata is native to Africa (Angola, Namibia, the Cape Province of South Africa (Namaqualand)) (GRIN 2000, Hickman 1993, Munz 1974). Dimorphotheca sinuata has been cultivated in Arizona since the 1940's, and has naturalized in various locations since the 1970's (Earle 1973 in Burgess et al. 1991). At the desert laboratory in Tucson the first collection was made in 1978 by Turner and Goldberg; in the 1991 report, Dimorphotheca sinuata was reported to be invading edges of the property; it spreads along washes (Burgess et al. 1991). Hickman (1993) states that it is an escape from cultivation, and establishes along roadsides and in disturbed places in California. Dimorphotheca sinuata seeds have been identified for quality seed oil; the plant has been investigated for its crop In its native area: Dimorphotheca sinuata's native region is characterized by hot, dry summers, with sparse and erratic rainfall occurring primarily in the winter months (Schulze 1965 in Rösch et al. 1997). On the North American continent: In the Sonoran Desert, Tucson, Arizona, Burgess et al. (1991) reports that it spreads along washes. In California, it occurs under 3280 ft. elevation, along roadsides and disturbed areas (Hickman 1993). Dimorphotheca sinuata likes to grow in full sun; its flowers will close in shade. The plants grow over a wide range of temperatures and photoperiods, provided there is sufficient moisture; although it is a drought tolerant plant. Dimorphotheca sinuata produces two different types of achenes within each inflorescence; one type from the disc flowers, another from the ray flowers. The germination requirements differ for each type. The disc achenes/seeds are winged, smooth, and larger; the ray achenes/seeds are smaller, not winged, with a wrinkled to tuberculate pericarp which is thicker and tougher. Optimum germination requirements for both disc and ray achenes was found to be between 45-72°F (7- 22°C) in light, although the disc achenes/seeds germinated at a rate of 95.5% and the ray achenes/seeds germinated at a rate of 3% (Beneke et al. 1993b). de Villiers et al. (1994) found that the highest germination percentages occurred at 68°F (20°C). Germination occurs when there is sufficient moisture available in the fall and winter months, although it also can germinate later, in spring. High temperatures reduced germination; this response was suggested as an adaptation to limit germination after rain in the warm, dry season (Beneke et al. 1993b). The differences between the two types of achenes/seeds are due to anatomical and chemical qualities in the pericarp. The ray achenes/seeds' pericarp not only has extensive sclerenchymous zones and tannins present (mechanical and chemical dormancies), but also a mucilaginous epidermis (Beneke et al. 1992b). Beneke et al. (1993b) reported that the disc achenes/seeds germinated more readily over a wide range of temperatures, in light and dark conditions, and in greater percentages when the conditions were favorable (Beneke et al. 1992b, Beneke et al. 1992a). The mechanical and chemical components of the ray achenes/seeds delay germination during unfavorable conditions (Beneke et al. 1992a, 1992b). Then, when the seeds germinate, the mucilaginous epidermis may contribute to water economy, keeping the achene moist for prolonged periods of time to endure germination (Beneke et al. 1992b). Fruit polymorphism represents a survival strategy; it assures species expansion under favorable conditions and survival under unfavorable conditions Dimorphotheca sinuata likes well-drained soils, and will tolerate dry soils (Michigan there is no information concerning this plant's abilities to compete in non-native situations. Many studies were available describing its competitive abilities intraspecifically, or interspecifically within its native environment (see bibliography); none were available for the North American continent. In Knowles et al. (1965), it was reported that in some of the crop trials on this continent (Georgia, Iowa, Nebraska, North Carolina, Texas, Washington), the plants were plagued by beetles, nematodes, or various fungi, preventing successful growth and/or maturity, but in a number of places (California, Colorado, Kansas, Maryland, Oregon) the crop was more or less successful. why it has the potential to do well as an exotic: Dimorphotheca sinuata is native to a relatively similar stressful, arid environment as the Sonoran Desert. It likes desert soils and environments, and is drought tolerant. As an annual forb, its life cycle is synchronized with the climate, actively growing only when favorable conditions are presented, escaping unfavorable conditions (e.g. high temperatures, water stress/drought) as a seed (van Rooyen et al. 1992b). In its native environment, rains are unpredictable, and this ephemeral plant has adapted by acquiring highly flexible (plastic) responses in lifespace, size, biomass allocation (van Rooyen et al. 1992a, 1992b); rapid establishment, growth, and reproduction are advantages in stressful environments. In addition to these responses, its dimorphism of achenes/seeds lends to an enhanced survivability in variable environments. Further research also showed that the plants that grow from these differing seeds have their own differing capabilities; plants cultivated from the disc achenes/seeds produced more achenes/seeds than those from the ray achenes/seeds. Yet, when under drought conditions, plants from the ray achenes/seeds produced more achenes/seeds (Beneke et al. 1993a). It was also shown that late-sown disc achenes/seeds produced fewer achenes/seeds than if early-sown, 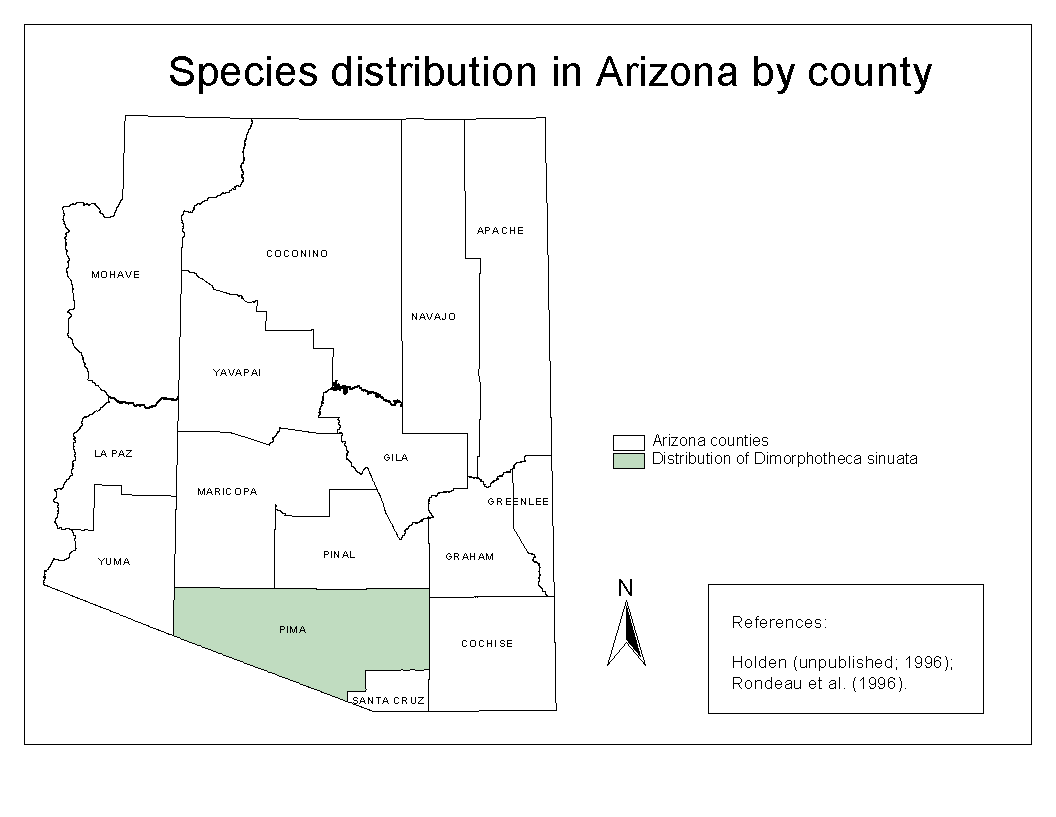 no information or sources found: this plant has been encouraged/promoted as an ornamental
for low water use situations and for its spectacular displays (as in its native south Africa); until recently, it hasn't been targeted as an invasive non-native species; information is minimal concerning its status as an invasive plant. known general distribution

no information or sources found.
contacts or technical specialists

Cooperative State Research, Education, and Extension Service
Website: http://www.reeusda.gov/1700/statepartners/usa.htm This website brings you to an interface to connect with Cooperative Extension programs throughout the United States; select the desired state, enter a link, often there is a search option in which information on a plant can be searched for. USDA, Forest Service, Rocky Mountain Research Station, September 2002 has published 'Linking Wilderness Research and Management. Volume 4 - Understanding and Managing Invasive Plants in Wilderness and Other Natural Areas. An Annotated Reading List. General Technical Report RMRS-GTR-79-volume 4 This volume is available on the Web; Website: http://www.fs.fed.us/rm/pubs/rmrs_gtr079_4.pdf (Website: http://www.fs.fed.us/rm/pubs/rmrs_gtr079_4.html provides some information if problems http://ces.asu.edu/collections/vasc_image_library/ImageIndex.jsp then click on appropriate letter, and then scroll down and click on appropriate name