Inhaled bronchodilator administration during mechanical ventilation: how to optimize it, and for which clinical benefit?

JOURNAL OF AEROSOL MEDICINE AND PULMONARY DRUG DELIVERY
Volume 21, Number 1, 2008
Mary Ann Liebert, Inc.
Pp. 85–95
DOI: 10.1089/jamp.2007.0630
Inhaled Bronchodilator Administration During Mechanical Ventilation: How to Optimize It, and CLAUDE GUERIN, M.D., Ph.D.,1,2 THOMAS FASSIER, M.D.,2 FRÉDÉRIQUE BAYLE, M.D.,2 STÉPHANE LEMASSON, M.D.,2 and JEAN-CHRISTOPHE RICHARD, M.D., Ph.D.1,2 ABSTRACT
Bronchodilators are frequently used in ICU patients, and are the most common medications
administered by inhalation during mechanical ventilation. The amount of bronchodilator that
deposits at its site of action depends on the amount of drug, inhaled mass, deposited mass,
and particle size distribution. Mechanical ventilation challenges both inhaled mass and lung
deposition by specific features, such as a ventilatory circuit, an endotracheal tube, and ven-
tilator settings. Comprehensive in vitro studies have shown that an endotracheal tube is not
as significant a barrier for the drug to travel as anticipated. Key variables of drug deposition
are attachments of the inhalation device in the inspiratory line 10 to 30 cm to the endotra-
cheal tube, use of chamber with metered-dose inhaler, dry air, high tidal volume, low respi-
ratory frequency, and low inspiratory flow, which can increase the drug deposition. In vivo
studies showed that a reduction by roughly 15% of the respiratory resistance was achieved
with inhaled bronchodilators during invasive mechanical ventilation. The role of ventilatory
settings is not as clear in vivo, and primary factors for optimal delivery and physiologic ef-
fects were medication dose and device location. Nebulizers and pressurized metered-dose in-
halers can equally achieve physiologic end points. The effects of bronchodilators should be
carefully evaluated, which can easily be done with the interrupter technique. With the non-
invasive ventilation, the data regarding drug delivery and physiologic effects are still lim-
ited. With the bilevel ventilators the inhalation device should be located between the leak
port and face mask. Further studies should investigate the effects of inhaled bronchodilators
on patient outcome and methods to optimize delivery of inhaled bronchodilators during non-
invasive ventilation.
INTRODUCTION
halation route is to enhance the therapeutic/tox-icity index of the agent. However, a drawback is BRONCHODILATORSAREFREQUENTLYUSEDin ICU lack/variability in efficiency. Because the clini-
patients receiving invasive mechanical venti- cal/physiological efficiency largely depends on lation (IMV) and commonly delivered through amount of drug available at its site of action, the inhalation route.(1) The main advantage of in- namely ␤2 or muscarinic receptors in the smooth 1Creatis INSERM, CNRS, Lyon, France.
2Service de Réanimation Médicale, Hôpital de la Croix Rousse, Lyon, Université Claude Bernard, Lyon, France. 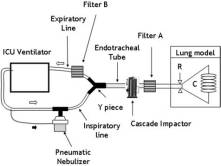 GUERIN ET AL.
muscular cells in the wall of the bronchial tree,and given that there are numerous causes of druglosses in intubated patients, it has long beenthought that inhaled bronchodilators are ineffec-tive or exhibited markedly variable clinical ef-fects. Bench studies have shown that it should benot the case if the drug inhaled mass and de-posited mass are properly measured(2,3) and ven-tilator-related key factors involved in the drugdelivery carefully controlled.(2,4) A substantialamount of nebulized drug may actually reach itstarget in patients,(4) and guidelines have been de-veloped to optimize the administration of agentduring IMV.(3,5) With increasing use of noninva-sive ventilation (NIV) in ICU,(6) the issue of the Schematic drawing of the experimental setup to efficiency of inhaled bronchodilators in this set- measure the pharmacological determinants of aerosol de- ting has also to be examined. This review will go position and to test the effects of various ventilator-re- over pharmacological concepts of the aerosol ad- lated factors on the drug lung deposition applied to in- ministration, devices used to generate aerosol, vasive mechanical ventilation. The pneumatic nebulizeris filled by the active drug and fed by the gas from the ventilator-related factors for an optimal delivery ICU ventilator at the recommended specific flow (usu- of drug inhaled during IMV and NIV, indications ally 6–8 L/min). The nebulizer is activated during the in- and effects of inhaled bronchodilators in ICU pa- spiratory phase (black-filled arrow), the tidal volume be- tients during mechanical ventilation.
ing kept constant. The gas reaches filter A where theinhaled mass of the drug is determined. During inspira-tion some amount of nebulizer charge can be exhaled Pharmacological concepts of aerosolization during without being inhaled, and is captured in filter B. In sep-arate experiments, a cascade impactor can be inserted to measure the particle size distribution of the aerosol. Theresistance (R) and/or compliance (C) of the lung model During mechanical ventilation, the aerosolized can be changed to mimick various clinical scenarii.
drug travels the inspiratory line and the endo-tracheal tube then deposits in the lungs, whilesome amounts flows out with the next expira- of the nebulizer charge and 53% of the inhaled tion (Fig. 1). By applying the mass balance law, it comes that the amount of drug inhaled minus Furthermore, by accommodating a cascade im- the amount of drug exhaled is equal to the pactor in the setup (Fig. 1) during a separate ex- amount of drug deposited in the lungs. The periment, the mass median aerodynamic diame- setup shown in Figure 1(2,4,7–9) depicts these ter (MMAD) can be determined. Particles with components relative to the initial amount of ac- MMAD Ͼ 5-␮m impact the endotracheal tube tive drug filled in the nebulizer (nebulizer and the ventilatory circuit during IMV and the charge). The inhaled fraction is the ratio of the pharynx during NIV. Particles with MMAD be- amount of drug captured by the filter A (Fig. 1) tween 1 and 5 ␮m mainly deposit in the airways to the nebulizer charge. It reflects the amount of by sedimentation while particles with MMAD be- drug available for inhalation by the patient be- tween 1 and 3 ␮m have the potential to reach the cause it takes into account the amount of drug lost into the nebulizer, the ventilator circuit andthe endotracheal tube. But the drug can also be Devices to generate aerosols during directly exhaled without being inhaled or ex- haled from the lungs after inhalation, and thisamount is captured on the filter B (Fig. 1). O’Ri- In patients receiving mechanical ventilation in- ordan et al.(4) combined in vitro (Fig. 1) and in haled bronchodilators can be administered by vivo experiments in seven mechanically venti- nebulizer or pressurized metered-dose inhaler lated patients, computed the exhaled fraction (MDI) devices. A nebulizer device is character- and found that: (1) the inhaled fraction averaged ized by a function curve that relates the cumula- 31%, and (2) the lung deposition averaged 15% tive output of the drug against time. The nebu- 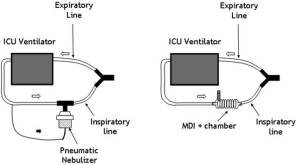 CHAPTER 6 Test Yourself, p. 228 1. What is classical conditioning? How was it discovered? ANSWER CLUES: A. Classical conditioning is sometimes called Pavlovian conditioning because it was discovered by Ivan Pavlov. a. Pavlov studied salivation in dogs. He collected the saliva in tubes connected to the dogs’ salivary glands. Pavlov noticed that his dogs were salivating simply on se