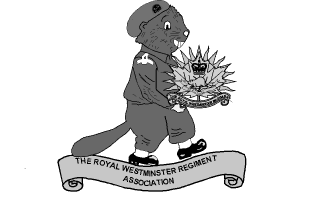 The GROUNDSHEET
The Official Publication of
The Royal Westminster Regiment Association
‘Dedicated to the ideals and comradship
we knew in wars and peace in our
services both home and abroad.’
Volume 2006/Issue 2
‘Pro Rege et Patria’
P.O. Box 854, New Westminster, BC. V3L 4Z8
Melfa Weekend is not in May!
The Melfa Weekend Dinner and AGM will be
June 18. See inside for details.
How did our comrades do in Italy? A presentation of their
trip will be held at the Melfa BBQ.
Where are our members? How long does the Association
have to survive? What can you do to help?
Local Army Cadet from our Agassiz corps travels to Italy
with our Regiment!