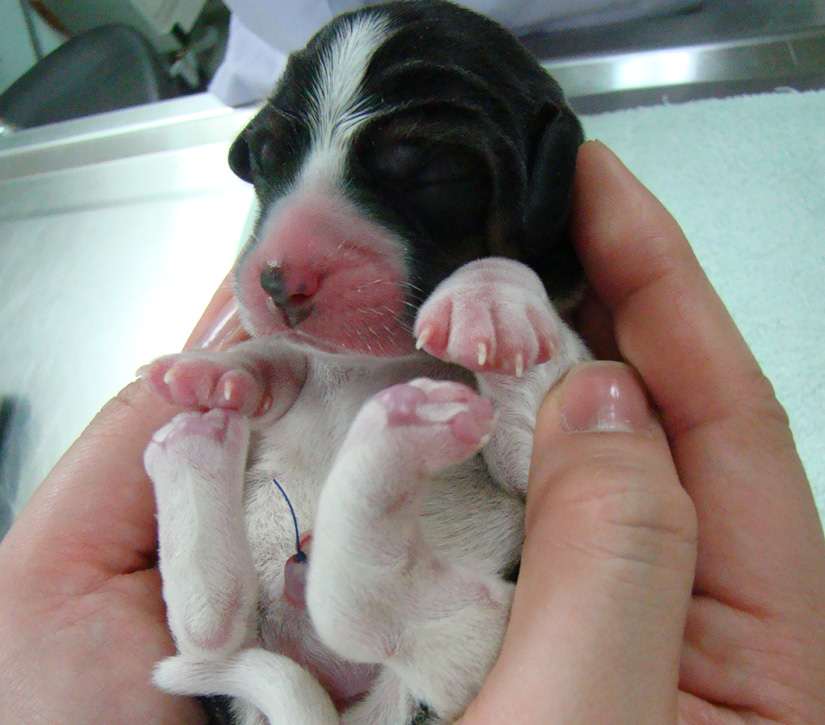 "Tegon" glows bright green under ultraviolet light in a feat that could eventually help scientists track diseases. A genetically modified female beagle named Tegon glows bright fluorescent green under ultraviolet light, according to a paper published in the journal Genesis. In the scientific record books, Tegon joins a red fluorescent puppy named Ruppy and Mr. Green Genes the cat as all being human-modified animals that can glow. ByeongChun Lee, a co-author of the Genesis paper, told Discovery News, "The entire body of the dog glows. One can witness a slightly yellower change in the color of the dog's skin, but to the naked eye, fluorescence cannot be seen without the presence of UV light and goggles." Lee is director of the Seoul National University Hospital for Animals in Korea and a professor in the Department of Theriogenology and Biotechnology. BIG PIC: Glowing Snail Uses Light to Fight Off Foes He and his colleagues achieved the feat using a five-step process. The scientists first inserted a DNA fragment that controls the expression of a green fluorescent gene into dog cells. They next extracted DNA from a dog oocyte (an immature female reproductive cell prior to fertilization) and injected the fluorescent-modified dog cells into it. The third step was to use a process known as Somatic Cell Nuclear Transfer to generate an embryo. The resulting embryo was then transferred into a surrogate dog mother. After 60 days of pregnancy, she gave birth to Tegon. When given a doxycycline antibiotic, the female beagle literally glows under UV light. Medical research teams such as Lee's are creating these animals in hopes of improving studies to benefit humans. Lee's process improves upon the earlier work, since it permits better control over the animal's glow. "The dog has 268 genetic type diseases that are similar to those of humans," Lee explained. "Also, the dog has physiological and anatomical similarities with humans. These reasons make them a good model for human disease." Lee said the genes injected to make the dog glow could be substituted with genes that trigger fatal diseases. He and his team would then be able to chart the course of Alzheimer's, Parkinson's and more, better understanding how such diseases develop. Dogs also make good candidates for this kind of research because they have "good communication skills with humans, which enable them to have good response skills to direct orders. They are also easy to handle." He added, "Compared to mice and other smaller animals, dogs provide a much larger sample collection." PHOTOS: Squid, Glowing Bacteria Work Well Together He said that dogs are not harmed in any way by the fluorescence-adding process. Chemyong Jay Ko, an associate professor in the College of Health Sciences at the University of Kentucky, told Discovery News that dogs "have long been used as one of the prime animal models in the field of medical research." He explained that they are used to test new drugs for their effectiveness, toxicology and dosage before the medications are administered to humans. The American Anti-Vivisection Society and other animal rights groups have been critical of efforts to create genetically modified dogs, cats, and other animals. Researchers around the world, however, have been involved in such projects. In the United States, the Louisiana Board of Regents has funded the Louisiana Gene Therapy Research Consortium, associated with the team that created Mr. Green Genes the glowing cat. Ko agrees with Lee that, for at least some applications, genetically modified dogs and cats work better than mice. Also, don't be surprised if glowing dogs and cats become a new pet trend in future. As Ko said, the "technology could be used for producing a variety of unique cats and dogs, possibly creating a new area of commercial interest."

Annexure - VII POST MORTEM HEALTH INSPECTION 1. The poultry must be inspected immediately after slaughter under adequate1.1.1 the surface of the bird's body, excluding head and feet savewhere these are intended for human consumption:1.1.3 the body cavities, must be subjected to visual inspection and,1.2.1 anomalies of consistency, colour and smell, in the carcases;1.2.2 major anomalies