One wheel - many spokes 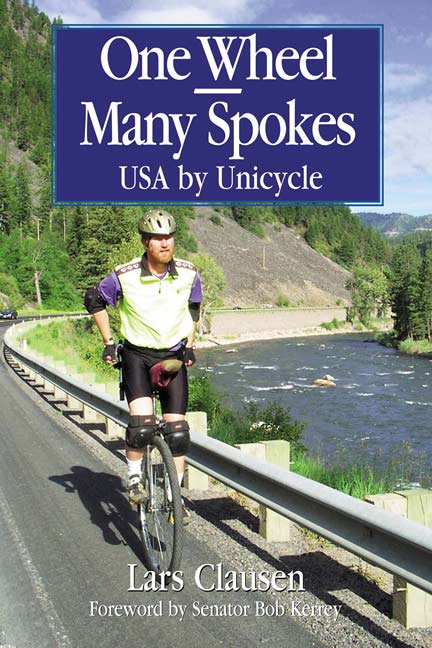 “Clausen’s unsinkable good nature and sunny outlook jumps out at readers from practically every line of his book.” Publishers Weekly

struggling all year, and last week it became clear that her remaining days are few. Karl and Deb agonized overwhether to come all the way out to Neah Bay. Finally Nora said to them, “I’m fine, you just go.” We keep them in our prayers, getting up again a few hours later when the sky turns bright blue, another cloudless day. After breakfast our group of two dozen drives the five-mile gravel road from the Tribal Center toCape Flattery. We bail out of cars and motor homes then hike the last half-mile to the cape with unicycles andguitars in tow. The cape is recognized as the most northwesterly point of the lower forty-eight states. The trail hashundreds of cedar steps. After the first few we are engulfed by forest. Three platforms give views out over wave-sculptured cliffs and onto a sea that is tranquil blue and green this morning. People remark what a perfect placeand a perfect day it is for starting the ride. We share a feeling of holy space without a word needing to be said.
Of course, we gather and say some words anyway. Chris Savage sings “You’re a family of God on a Journey,” a song he wrote for us back when we left Michigan.
Bishop Ron Martinson has brought a banner made by folks at Alaska Native Lutheran Congregation. A bald eagle has been circling above us as we mark the beginning of this journey. I am reminded of seal hunting withFrank.
“Quyanna Jesus.” I silently repeat his ancient words of thanks.
We linger; then we track back up the cedar board trail to start pedaling. Robert has been itching to start this ride from the moment he got the four-month leave. Even the five miles back to the tribal center have his eyes lit up withcross-country anticipation. Anne has her new recumbent bicycle ready. She can recline on this bike, a bit like alawn chair on wheels. Kai has his bike. KariAnna has her unicycle. My brother Karl borrows one of my unicycles.
Those not riding line up for more pictures.
“Look!” someone yells and points.
As we turn another bald eagle swoops close and circles around us. One time. Twice. Then again, close enough to see individual feathers. Weather, words, and now eagle’s wings are marking this beginning. We all mount upand ride onto the road.
KariAnna pumps right along on her unicycle. Uphill and down, she makes a full two miles, her longest ride ever. Kai does the same on his bike, even though the hills are steep for him. My mom has been following in the car,ready to load the kids and drive them back to the Tribal Center.
When day’s end comes, I’m overwhelmed with gratitude. We have been surrounded by love and care and well wishes; for the moment we are full of confidence to ride into all the unknown challenges awaiting. Time now toturn the corner and begin heading east across America.

Coronary bypass and nutritional care post surgery Coronary heart disease Coronary heart disease is characterized by a narrowing of the arteries that supply blood to the heart. Fatty deposits (rich in cholesterol) stick to the artery walls, causing thickened patches called plaques to develop (atherosclerosis). These plaques narrow the arteries and reduce the flow of blood to the heart mu