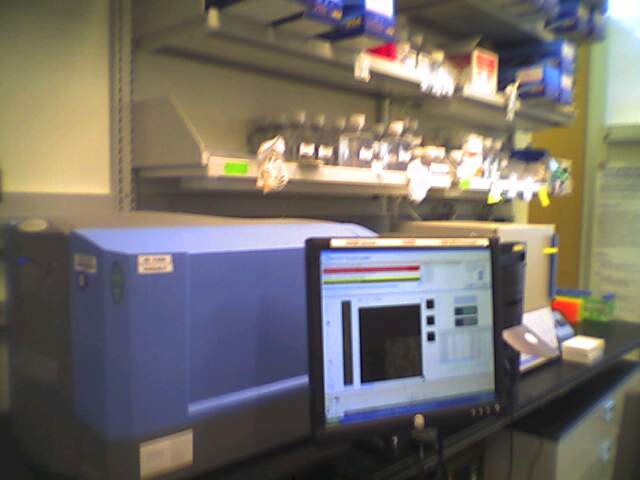 [Or, The ethical implications of SQL.]The figure explains how my work in statistical genetics is all possible. It is what a genetics lab looks like. That’s a work bench, like the ones upon which thousandsof pipettes have squirted millions of liters of fluid in the past. But you can see that itis now taken up by a big blue box, which hooks up to a PC. Some of these big boxesuse a parallel port (like an old printer) and some run via USB (like your orThe researcher puts processed genetic material in on the side facing you inthe photo, onto a tray that was clearly a CD-ROM drive in a past life. Then the internalLASER scans the material and outputs about half a million genetic markers to a plaintext file on the PC.
Figure 1: The tools of the data processing field known as Biology I know I’m not the first to point this out, but the study of human health is increas- ingly a data processing problem. My complete ignorance regarding all things biologicalisn’t an issue in doing analysis, as long as I know how to read a text file into a databaseand run statistical tests therefrom.
Historically, the problem has been to find enough data to say something. One guy had to sail to the Galapagos Islands, othersused to wait for somebody to die so they could do dissections, and endless clinical re-searchers today post ads on bulletin boards offering a few bucks if you’ll swallow theblue pill.
But now we have exactly the opposite problem: I’ve got 18 million data points, and the research consists of paring that down to one confident statement. In a decade or so,we went from grasping at straws to having a haystack to sift through.
I’ve got tools printed in textbooks from the 1970s that will eke out a relationship from a minimum of data, and 5GB of genetic data regarding people with bipolar disor-der over on the other screen. Applying one to the other will give me literally thousandsof ways of diagnosing bipolar disorder, none of which are in any way trustworthy.
So the analytic technology is not quite there yet. There’s a specific protocol for drawing blood that every nurse practitioner knows by heart, and another protocol forbreaking that blood down to every little subpart. We have protocols for gathering ge-netic data, but don’t yet have reliable and standardized schemes for extracting informa-tion from it.
When we do have such a protocol—and it’s plausible that we soon will—that’s If you remember as much high school biology as I do, then you know that a gene is translated in human cells into a set of proteins that thengo off and do some specific something (sometimes several specific somethings).
If you know that a certain gene is linked to a certain disorder, then you know that there is an entire pathway linked to that disorder, and you now have several pointswhere you could potentially break the chain. [Or at least, that’s how it’d work in theory. Again,there’s no set protocol.] There are many ways to discover the mechanism of a disorder, butthe genetic root is the big fat hint that can make it all come together right quick. So thescientists still working with squishy biological organisms are also keeping their eye onthe database-crunchers for clues about what to poke at.
Then, once there’s consensus on a pathway, the drug companies go off and develop a chemical that breaks the destructive chain, and perhaps make a few million per yearin the process.
Implication three: Free will versus determinism search for genetic causes thought it was all a conspiracy. If there’s a genetic cause formental illness, then that means that it’s not the sufferer’s fault or responsibility. Insteadof striving to improve themselves, they should just take a drug. And so, these geneticstudies are elaborate drug-company advertising.
From my casual experience talking to folks about it, I find that this sort of attitude is especially common regarding psychological disorders. See, every organ in the humanbody is susceptible to misfiring and defects—except the brain, which is created in theimage of ’’, and is always perfect.
Annoyed sarcasm aside, psychological disorders are hard to diagnose, and there’s a history of truly appalling abuse, such as lobotomies for ill behavior, giving women hysterectomies to cure their hysteria, the sort of stories that made One Flew over theCuckoo’s Nest plausible, &c. Further, there are often people who have no physiologicaldefect in their brains, but still suffer depression or other mood disorders. They get somesun, do some yoga, and everything works out for them.
But none of that means that the brain can not have defects, and that those defects The problem is that our ability to diagnose is falling behind our ability to cure.
We know that certain depressives respond positively to lithium, Prozac, Lexapro, Well-butrin, Ritalin, Synthroid, and I don’t know today’s chemical of the month. But we stilldon’t have a system to determine which are the need-of-drugs depressives and whichare the get-some-sun depressives.
Or to give a physical example, we don’t know which obese individuals have prob- lems because of genetic barriers and which just need to eat less and exercise. It’s onlyharder because, like the brain, the metabolism is an adaptive system that can be con-ditioned for the better or for the worse, confounding diagnosis. Frequently, it’s bothbehavior and genetics, albeit sometimes 90% behavior and other times 90% genes.
A genetic cause provides genetic tests. If we have a drug based on a genetic path- way, as opposed to a drug like Prozac that just seemed to perk people up, we can lookfor the presence or absence of that genetic configuration in a given individual. Thisain’t a silver bullet that will sort people perfectly (if that’s possible at all), but having apartial test corresponding to each treatment is already well beyond the DSM checklistswe’re stuck with now.
From here, there are ethical implications, which I’ll save for next time.

Remember the Side Effects of Haloperidol: A Case Report G. F. ALVAREZ, G. A. SKOWRONSKI Department of Intensive Care, The St George Hospital, Kogarah, NEW SOUTH WALES ABSTRACT An eighteen-year-old man who had a laminectomy and subtotal excision of a lipomyelomeningocele, received a single dose of haloperidol for post-operative pain and agitation. The patient suffered an acute dystonic