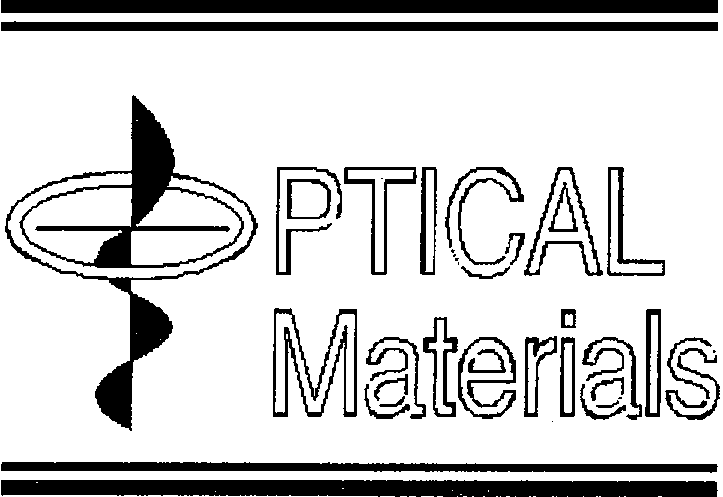 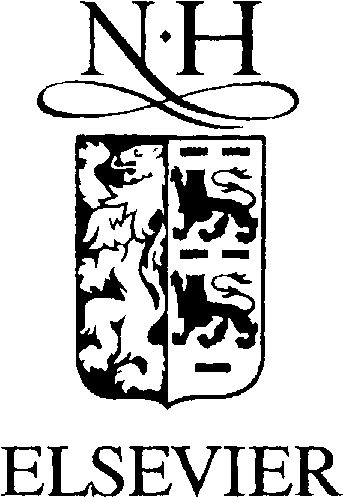 Y. Kalisky a,*, C. Labbe a, K. Waichman a,b, L. Kravchik a, U. Rachum a, a ‘‘Arava’’ Laser Laboratory, Rotem Industrial Park, D.N. Arava, Mishor Yamin 86800, Israel b Laser Department, NuclearResearch Centre Negev, P.O. Box 9001, Beer Sheva 89140, Israel c Crystal Laboratory, Shanghai Institute of Optics and Fine Mechanics, Chinese Academy of Sciences, Received 29 June 2001; received in revised form 15 October 2001; accepted 26 November 2001 We investigate the repetitive modulation in the kHz frequency domain of a passively Q-switched, diode-pumped Yb:YAG laser, by Cr4þ:YAG, Cr4þ:LuAG, and Cr4þ:GSGG saturable absorbers. The results presented here are fo-cused towards the design of a passively Q-switched Yb:YAG microlaser. The free-running performance of both rod anda diskYb:YAG is characterized and experimental parameters such as gain and loss are evaluated. These values, to-gether with the value of the stimulated emission cross-section, e.g. rem ¼ 3:3 Â 10À20 cm2 were found to ﬁt between ourexperimental results and an existing numerical model which relates the experimental and physical parameters to theminimal threshold pumping power. Q-switched pulses with maximum peakpower of %10.4 kW, with energy of %0.5mJ/pulse, were extracted with 30% extraction eﬃciency. Ó 2002 Elsevier Science B.V. All rights reserved.
Keywords: Diode pumped lasers; Passive Q-switching; Yb:YAG laser and microsurgery. Most commonly, systems pres-ently used are based on Nd:YAG or Nd:YVO4 Passively Q-switched, diode pumped solid state lasers, passively Q-switched by Cr4þ:YAG, where lasers are currently being used as miniature or the unique characteristics of Cr4þ garnets as sat- microlasers capable of delivering high peakoutput power at high repetition rates and short nanosec- Similarly to the Nd3þ/Cr4þ:YAG system, it is ond (ns) temporal pulsewidth. These lasers are of anticipated that the Yb3þ/Cr4þ laser system will great interest due to their potential applications in posses signiﬁcant advantages related to micro- micromachining, remote sensing, target ranging, lasers and their applications. During the last severalyears there are convincing indications pertain-ing the Yb3þ-based diode-pumped lasers and their possibility to replace the currently used Nd3þ- Corresponding author. Tel.: +972-7-655-6301; fax: +972-7- based systems, in particular the diode-pumped E-mail address: [email protected] (Y. Kalisky).
0925-3467/02/$ - see front matter Ó 2002 Elsevier Science B.V. All rights reserved.
PII: S 0 9 2 5 - 3 4 6 7 ( 0 2 ) 0 0 0 0 3 - 4 Y. Kalisky et al. / Optical Materials 19 (2002) 403–413 Solid state lasers based on Yb3þ doped solid nonradiative processes among excited states, hosts emit coherent radiation peaking at 1030 nm or quenching of excited state luminescence.
=2ðA1Þ ! 2F7=2ðZ3Þ, levels, where A1 and Z3 Pumping wavelengths of 940 or 970 nm––utiliza- are the J-Starkcomponents located at 10,327 and tion of the reliable Al-free InGaAs diode lasers 612 cmÀ1, respectively [2]. Yb-based solid-state • Yb is capable of energy storage due to its long lasers have several advantages over Nd-doped la- lifetime––in the 0.95–1.2 ms temporal domain, sers. The advantages of Yb laser can be summa- • Finally, there is signiﬁcant advantage in using the YAG as laser host since both Yb and Nd • Low quantum defect e.g. 91% quantum eﬃ- ciency, hence low fractional heating (<11% as chanical properties of the hosting YAG.
compared to 37–43% in Nd3þ:YAG) [3], andsmaller thermal load on the crystal.
The main physical and optical characteristics of • Broad absorption bandwidth of about 10 nm Yb3þ:YAG are summarized in Table 1.
and 940 nm ð2F7=2 ! 2F5=2Þ, that implies more The main disadvantage of Yb doped host is its ﬂexibility on the pumping diode wavelength quasi-three-level nature due to the thermal popu- control within the absorption band of the gain lation of the highest J splitting of the 4F7=2 lower medium, and on the diode temperature. (This terminating lasing level, which is about 612 cmÀ1 absorption bandwidth is ﬁve times broader than above the ground level. This thermal population the 808-nm absorption transition in Nd:YAG.) has deleterious eﬀects of resonant re-absorption of • Broad emission bandwidth which results in the laser emission from the ground terminal Stark tunability and the ability to generate short state, which is thermally populated at 300 K by about 5% of the 4F7=2 population. Therefore, it is • High doping levels––up to 20 at.% and even diﬃcult to obtain population inversion at room higher levels, without concentration quenching temperature, and therefore, the lasing threshold is high and its eﬃciency is consequently low. Eﬃcient • Due to the simple 4f13 electronic conﬁguration population inversion is achieved by either pump- of Yb3þ ion, there are no relevant higher lying ing at high pump power densities at 300 K (1.5–10 excited states, and therefore, there is no excited kW/cm2) [4], or by depopulation of the highest state absorption, upconversion phenomena, Starkcomponents. The latter option is achieved by Table 1Main physical characteristics of Yb:YAG crystal Change of refraction index with temperature 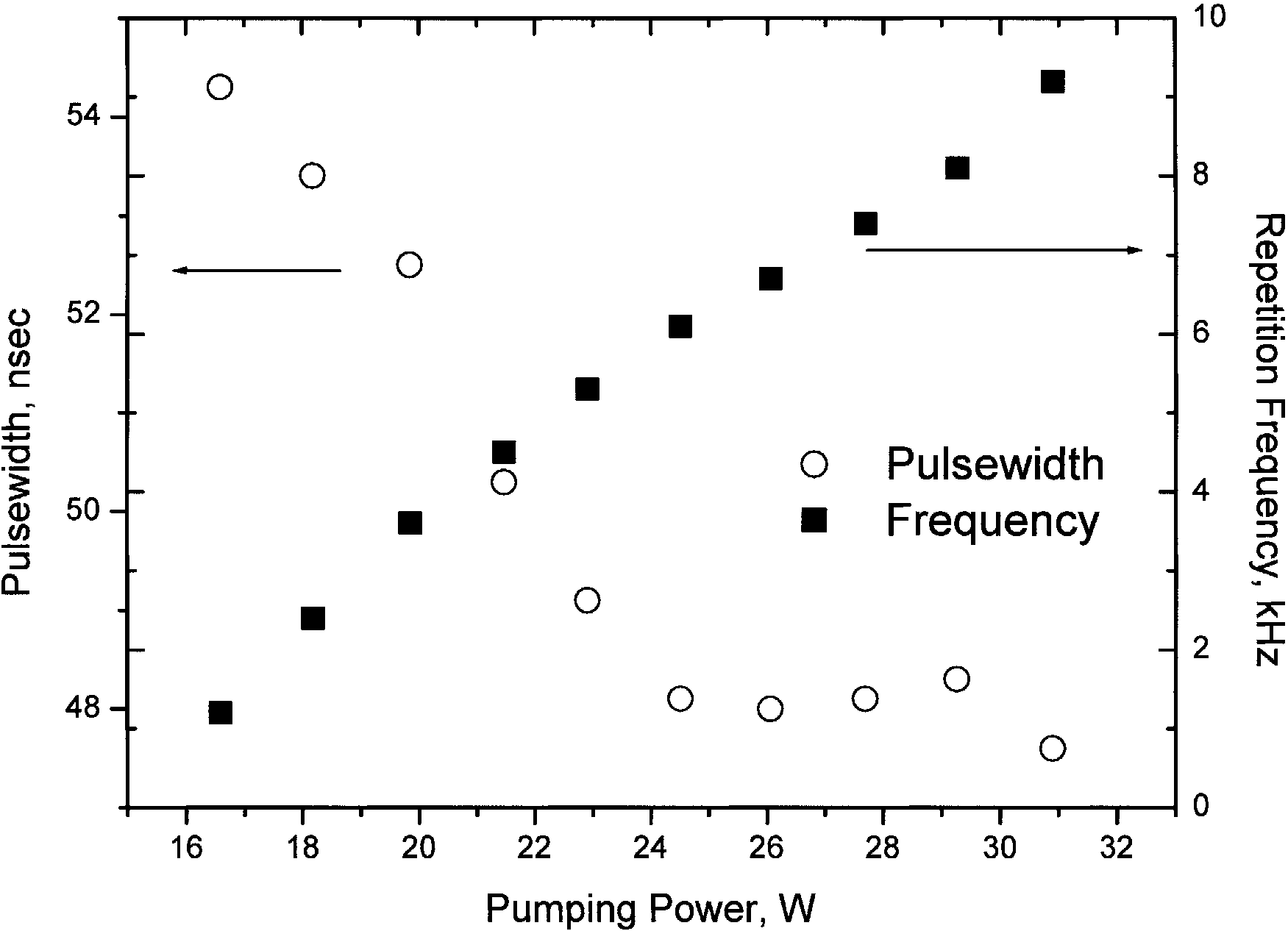 Y. Kalisky et al. / Optical Materials 19 (2002) 403–413 reﬂectivity of R ¼ 95% and keeping the laser of Pin ¼ 28 W we observed damage to the saturable absorber and degradation in the performance by%25%. The maximum average output power after 3.1.2. Laser rod conﬁguration (sample #1) realignment was Pout ¼ 4:2 W @ Pin ¼ 43:5 W 3.1.2.1. Low pump power level (up to 30 W). Op- input power and the curve was slightly saturated.
erating passively Q-switched Yb:YAG laser rod In the pumping range of 20–51 W, the pulsewidths for both Cr4þ samples (a) and (b) at 30 W pumping ranged from 48 to 38 ns, respectively, and the laser power, produced pulses having temporal pulse- pulse frequency varied from 2 to 23.4 kHz, re- width (FWHM) of s % 16 ns, at an average mod- ulation frequency of f % 4 kHz. The average To improve the Q-switching performance, we output power of Yb:YAG laser rod was lower placed the Cr4þ:YAG inside a water cooled heat than the diskgeometry, namely Pout % 100 mW, sinkat 15 °C. In this conﬁguration (R ¼ 85%), the due to damage to the Q-switching surface. Signif- maximum average output power was Pout ¼ 4:5 W icant improvement in the Q-switched laser per- at an input pumping power of Pin ¼ 32:5 W. Fur- formance was obtained using an output coupler ther increase in the pumping power, up to 53 W, with a reﬂectivity of R ¼ 85%. We obtained max- led to saturation with maximum average output imum average output power of 1.32 W, with a power, namely, Pout % 4:8 W. Under the same slope eﬃciency of g ¼ 12:8%. For the 1.32 W experimental conditions, the free-running output average output power (@ 31 W input pumping power was %16 W, therefore the extraction eﬃ- power), the modulation frequency was f % 13 kHz, with an average pulsewidth of 22 ns. This switched pulsewidth and the modulation frequency implies that the pulse energy is %100 lJ/pulse and on the input pumping power is presented in Fig. 2.
the peakpower is %4.5 kW. At present the results From this ﬁgure we observe that in the pumping with R ¼ 85% are preliminary and no attempt was range of 16–33 W, the repetition rate changed made to optimize the Q-switched performance signiﬁcantly from 1.2 to 9.2 kHz, respectively. The with other output couplers. All the Q-switched change in the pulsewidth in this range was from measurements were performed with Cr4þ:YAG 54.3 to 48 ns, respectively. This conﬁguration sample (a). The maximum error in the pulsewidth yields pulse energy of 0.5 mJ/pulse and peakpower measurements is in the range of Æ10%. The free running average output power was Pout ¼ 5:3 Wunder pumping power and output coupling reﬂectivity,(31 W, Theat sink ¼ Tcrystal ¼ 15 °C, and R ¼ 85%,respectively). The fraction of the Q-switchedpower relative to the free-running output power isdeﬁned by g experimental conditions. We should note here thatdue to the surface damage on the Q-switching el-ement and consequently, the output power de-gradation at about Pin % 26–30 W, the pumpingpower did not exceed this value.
3.1.2.2. High pump power level (up to 60 W). Wealso tested for Q-switching the laser rod (2 Â 4mm) using Cr4þ:YAG sample (a) under higher Fig. 2. The repetition frequency and output pulsewidths versus pumping load similarly to what have been per- pumping power of a passively Q-switched, diode-pumped formed with Yb:YAG disk. The output coupler Yb:YAG/Cr4þ:YAG. The output coupling reﬂectivity is used was also R ¼ 85%. At input pumping power