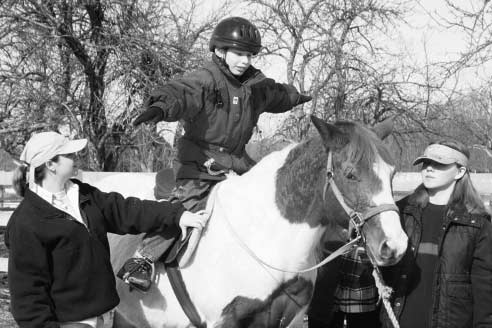 the cones by tossing beanbags or place large rings around ers for assistance and support. Instructors determined that the five non-ambulatory children required back-riders or double All riders’ safety was always ensured: they wore fitted side-walkers for assistance in postural, truncal support, and helmets and used chinstraps. One or two side walkers used hand-over-hand encouragement when reaching, grasping, various side-helping techniques. If the rider was more physi- twisting, or performing other maneuvers during the therapeu- cally challenged, a back-rider was used to sit directly behind tic riding session. The five non-ambulatory riders performed the child, helping to maintain upright posture. The instruc- all the same tasks as the other participants with less disability tor stood nearby and directed the therapy, always monitor- (GMFCS Levels I to III), none of whom used a back-rider. ing the movement and behavior of the horse. A waist straparound the rider was occasionally used by side-walkers or the back-rider to provide a comfortable handgrip . One-way ANOVA with repeated measures using actual scores The horse was led at a controlled walk by a trained assis- for each child and the post-hoc Bonferroni test was used to tant directing the horse with a lead line attached to its halter.
determine statistical significance which was set at p<0.05. As therapy progressed, less support was needed from theside-walkers or the back-rider. While the rider was most often lying or sitting directly on the warm horse blanket or Analysis of the relation between GMFCS Level and changes in occasionally using a saddle, the instructor directed various GMFM could not be performed due to the small numbers of exercises of stretching, balance, and posture as detailed above. These exercises were performed as the horse was led For all riders, PT frequency was consistently 2.5 (SD 0.2) in a slow, steady walk, with the rider responding to the three- times per week and OT frequency was 2.2 (SD 0.2) times per week throughout the entire study. Of 17 riders, a majority The five riders who were non-ambulatory (GMFCS Levels (n=13) had previous horseback riding experience. Five riders IV and V) were positioned on the horse in the straddle posi- had previous orthopedic surgeries, many with multiple ortho- tion using a horse blanket and a surcingle, not a saddle. pedic surgeries: three riders with hamstring lengthening, two Two of these five riders (both GMFCS Level V) needed a back riders with Achilles tendon lengthening, two riders with hip rider, whereas the other three riders (two riders GMFCS Level osteotomies, and one rider with femoral hip resection and IV and one rider GMFCS Level V) only required two side-walk- adductor release. Four of the children had neurological surg- Figure 1: Rider performs arm exercises during horseback riding therapy, assisted by two side-walkers and a lead walker.
(Photo from Equistar Therapeutic Riding Center, Appleton, NY. Reproduced with permission.) Horseback Riding and Gross Motor Function John A Sterba et al. eries, including three with selective rhizotomies and one with a WeeFIM (Braun et al. 1991) Motor, Cognitive, and Total ventricular peritoneal shunt. Ten of the riders wore ankle–foot scores did not change before, during, or following HBRT.
orthoses. Only two of the children were on medication: one Absolute values for pre-riding WeeFIM Scores for all 17 riders rider was taking sodium valproate and valproic acid, acetazo- were: WeeFIM Motor, 58.1 (SD 7.4); WeeFIM Cognitive, 22.4 lamide, sodium cromoglycate, and albuterol; the other rider (SD 3.2); WeeFIM Total Score, 80.5 (SD 22.4).
was taking phenobarbital, baclofen, and ranitidine.
From 6 weeks before riding to the onset of riding therapy, Table I: Participant characteristics (n=17)
O, orthopedic; bilat, bilateral; N, neurological; VP, ventricular peritoneal; AFO, ankle–foot orthosis; sd valp/valp ac, sodium valproate andvalproic acid; sd cromogly, sodium cromoglycate.
Developmental Medicine & Child Neurology 2002, 44: 301–308

Patent expiries: Which drugs have price reductions? Adapted from Drug patents: which will expire in 2012 and 2013? UK Medicines Informationharmacists for NHS healthcare professionals The patents of 25 drugs currently marketed in the UK are due to expire in 2012, with a further 21 in 2013. Some of these will be marketed as generics shortly after the patent expiry, although at present i