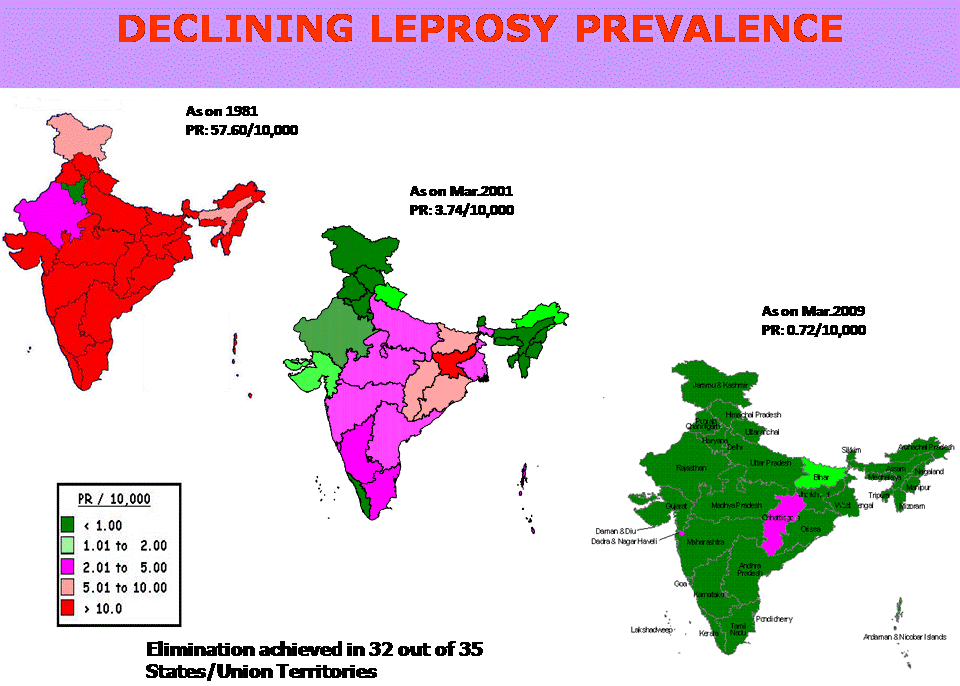 History of NLEP
Leprosy is a chronic infectious disease caused by Mycobacterium leprae. It usually affects the skin and
peripheral nerves, but has a wide range of clinical manifestations. The disease is characterized by long
incubation period generally 5-7 years and is classified as paucibacillary or mulitbacillary, depending on the
bacillary load. Leprosy is a leading cause of permanent physical disability. Timely diagnosis and treatment
of cases, before nerve damage has occurred, is the most effective way of preventing disability due to
leprosy.

The earliest records of a ‘leprosy like’ disease come from Egypt, dating as far back as 1400 BC. In China
and India the first records appeared in the sixth century BC. In China, a disciple of Confucius named Pai-
Nie suffered from a disease resembling lepromatous leprosy, which was known at that time as ’li’ or ‘lai’.
In India, leprosy was first described in the Susruth Samhita and treatment with ‘chaulmoogra’ oil was
known at that time. It is said that leprosy was referred to as Kusht in the Vedic writing, which is how the
disease is known as even to this day in India, Nepal, Indonesia, Malaysia and many other countries in
South East Asia. Clay statues of leprosy patients were also found in Mesopotamia dating as far as back as
400 BC.

A drug “Chaulmoogra” oil was used for leprosy treatment until “Dapsone” was discovered with antileprosy
effects during 1940s. It was in 1970s when multi drug therapy (MDT) consisting of Rifampicin,
Clofazimine and Dapsone were identified as cure for leprosy which came into wide use from 1982
following the recommendations of WHO. Since then the services for leprosy patients gradually changed
from institutional to outpatient care through health centres and field clinics. Gradually the infected and
cured leprosy patients began to be accepted by the Community as a result of intensive health education
and visibly successful results of MDT.

Govt. of India started National Leprosy Control Programme in 1955 based on Dapsone domiciliary
treatment through vertical units implementing survey education and treatment activities. It was only in
1970s that a definite cure was identified in the form of Multi Drug Therapy. The MDT came into wide use
from 1982, following the recommendation by the WHO Study Group, Geneva in October 1981. Govt. of
India established a high power committee under chairmanship of Dr. M.S. Swaminathan in 1981 for
dealing with the problem of leprosy. Based on its recommendations the NLEP was launched in 1983 with
the objective to arrest the disease activity in all the known cases of leprosy. However coverage remained
limited due to a range of organizational issues and fear of the disease and the associated stigma. At this
stage in view of substantial progress achieved with MDT, in 1991 the World Health Assembly resolved to
eliminate leprosy at a global level by the year 2000. In order to strengthen the process of elimination in
the country, the first World Bank supported project was introduced in 1993.
The 1st Phase of the World Bank supported National Leprosy Elimination Project started from
1993-94 and completed on 31.3.2000. This Project involved a cost of Rs. 550 crores of which World Bank
loan was Rs. 292 crores. During this phase, the prevalence rate reduced from 24/10,000 population in
1992 before starting 1st Phase project to 3.7/10,000 by March 2001.
The 2nd Phase of World Bank Project on NLEP started for a period of 3 years from 2001-02. The
project involve a cost of Rs. 249.8 crore including World Bank loan of Rs. 166.35 Crore and WHO to
provide MDT drugs free of cost worth Rs. 48.00 crore. The project successfully ended on 31st Dec. 2004.
The National Leprosy Eradication Programme is being continued with Govt. of India funds from January
2005 onwards. Additional support for the programme is continued to be received from the WHO and ILEP
organizations. MDT is to be supplied free of cost as of now by NOVARTIS through WHO.
In the year 2001, after the global elimination was achieved, a target was reset for the remaining 14
countries to achieve elimination on national basis by December, 2005. India was one of these countries.
The National Health Policy, Govt. of India sets the goal of elimination of leprosy i.e. to reduce the no. of
cases to < 1/10,000 population by the year 2005.
The National Leprosy Eradication Programme took up the challenge with the active support of the State/
UT Governments and dedicated partners in the World Health Organisation, the International Federation of
Anti Leprosy Associations (ILEP), the Sasakawa Memorial Health Foundation & the Nippon Foundation,
NOVARTIES, DANLEP (1986-2003) and the World Bank (1993-2004).