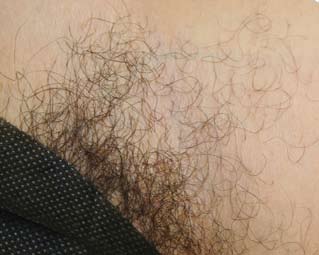 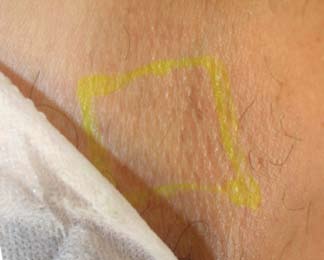 Removal of Bikini HaiR
times. However, as shown in Figure 1, the pres- ent study found that 5 treatments with the new 810-nm diode laser removed approximately 87% of hair in the bikini area after 6 months. This clearance rate is higher than the 78% clearance rate achieved after 5 treatments with the alexan-drite laser after 1 year.10 The 810-nm diode laser is designed to opti- Hair Reduc
mize hair removal by careful configuration of wavelength, spot size, pulse duration, and flu-ence. The 810-nm wavelength and large spot size allowed for deep penetration, good melanin absorption, and avoidance of excessive competi- Treatment Visit
tion from other chromophores.17 In addition, the large spot size and high repetition rate led to very Figure 1. Median hair reduction percentages before treatment, after 2 treat-
short treatment times of 5 to 7 minutes per par- ments, 3 months after the final treatment, and 6 months after the final treatment. ticipant. The short treatment times allowed for PreTx indicates pretreatment; Tx2, 2 treatments; FU, follow-up. many participants to be treated in a single day, which added to participant satisfaction because the short duration of the procedure made it easier to The efficacy and safety of diode lasers for the long-term tolerate comfortably. removal of hair has been shown.12-18 Repetitive treatments For a laser or light-based device, treatment time is have been found to provide greater hair reduction than a determined by the coverage rate, which is the product single treatment13 at 20-month follow-up, and treatment of the area of the spot and the repetition rate.26,27 In outcomes are comparable with those obtained with the our study, the 810-nm diode laser spot was rectangu-alexandrite laser19 and Nd:YAG laser.20 lar, measuring 12310 mm, so the area of the spot was The bikini area has been treated with the alexandrite 120 mm2. Since the repetition rate was 3Hz, the cover- laser,10,21 normal-mode ruby laser,22 long-pulsed ruby age rate is 360 mm2/s. The coverage rate of a comparable laser,23 Nd:YAG laser,24,25 and diode laser.14,15 Clinical 800-nm diode laser device used for hair removal may be results were supported by histologic data in 2 studies.15,24 similarly calculated. In the study of Lou et al,13 the spot It is difficult to compare the results of the present of the 800-nm laser device was square shaped, measur- study with those of other studies because of the different ing 939 mm. Since the maximum repetition rate of this methods of assessing hair removal, the differences in the device is 2 Hz,5 the coverage rate is 162 mm2/s, less than number of treatments, the lack of specific data on hair half of the coverage rate of the 810-nm diode laser used in removal from the bikini area, and the different follow-up the present study. A square spot measuring 12312 mm, Figure 2. The bikini area of a 44-year-old female before treatment (A) and at 6-month follow-up (B) who achieved an 84.8% reduction in hair
counts after 5 treatments with the 810-nm diode laser.
394 Cosmetic Dermatology® • jULY 2008 • VoL. 21 No. 7
2008, Quadrant HealthCom Inc. All rights reserved 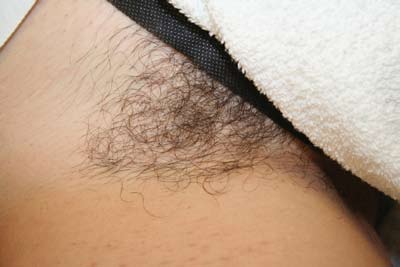 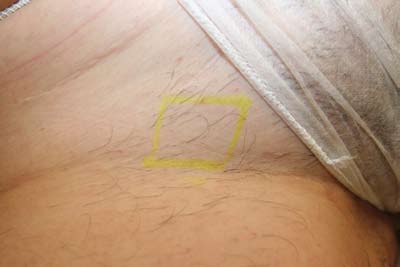