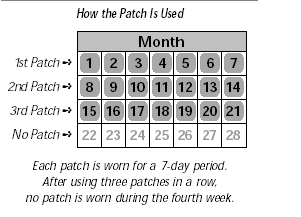 What is the contraceptive patch?
The contraceptive patch (Ortho Evra™ transdermal system) is a weekly hormonal birth
control method that you place on your skin like a large Band-Aid®. It is a thin, smooth,
beige square that is about the size of a matchbook. The patch contains hormones that
are released through the skin and into the bloodstream.
How does it work?
The contraceptive patch works very much like birth control pills. It contains the same
hormones (estrogen and progestin) found in commonly used birth control pills and
releases these hormones at the same daily rate as the pill. When you place the patch on
your skin, the hormones are absorbed through your skin and enter your bloodstream.
Wearing the patch keeps a woman from ovulating, which means she does not release
an egg that could be fertilized by a man’s sperm. The patch also thickens a woman’s
cervical mucus, which makes it harder for sperm to enter the womb.
Are there any risks for using it?
Users of the contraceptive patch are exposed to more total estrogen in their blood than if
they were taking a typical birth control pill containing 35 micrograms of estrogen.
However, the highest blood level of estrogen (peak blood levels) is lower with the patch
than with typical birth control pills. In general, increased estrogen exposure may
increase the risk of blood clots. However, it is not known if women using the patch are at
a greater risk of experiencing these side effects.
How effective is it?
When used correctly, the patch is 99% effective. It may be less effective in women
weighing more than 198 pounds. The patch begins to work right away, although a
woman should use another birth control method (like a condom) during the first week.
This is not necessary if she starts using the patch within 24 hours of her menstrual
period.
How is it used?
The patch is used on a weekly 28-day cycle, similar to
birth control pills. Each box contains three patches. A patch is worn for a 7-day period, then removed and . replaced with a new patch. Every new patch should be applied on the same day of the week. After using three patches in a row, no patch is worn during the fourth week. This “hormone-free” week allows a woman to get her menstrual period. After the patch-free week, the woman begins using a new box of patches. (For more detailed instructions, speak with your clinician and refer to the package insert.)

Where can a woman wear the patch?
The patch can be applied to four areas of the body (see Figure): (1) abdomen; (2) upper
outer arm; (3) upper torso (front or back, but not on the breasts); and (4) buttocks. When
replacing an old patch with a new one, the woman should not stick the new patch to the
same place on the skin. This is to help prevent skin irritation or rash.

Will the patch fall off if I swim, bathe, or sweat?
Probably not. The adhesive is designed to stay put even when under water. In clinical
studies, only a small number of patches (5%) became partially or fully detached. A
woman should be careful not to apply creams or oils (such as suntan lotion) under or
near the patch, as this can make it more likely to fall off.
What happens if a patch becomes loose or falls off?
First, the woman should try to reattach it. If the detached patch is no longer sticky, the
woman should replace it with a new patch. This new patch should be worn until the next
“patch change day,” then replaced. If the patch was off the skin for more than 24 hours,
however, the woman should begin a new cycle of patches and may need to use another
form of contraception (such as a condom) for the first week of this new cycle. (For more
detailed instructions, speak with your clinician and refer to the package insert.)

What are the side effects?
The side effects of the patch are similar to those for birth control pills. During the first
cycle of use, about one in five women may experience spotting or breakthrough bleeding
between menstrual periods. This effect decreases after the first several cycles. Other
side effects reported by women in clinical studies included headache, nausea,
application site reactions (rash or irritation), and breast discomfort.
How do I know if the patch is right for me?
The patch is an effective contraceptive that can be used safely by most women. The
patch does not protect against sexually transmitted diseases (STDs) or HIV. Women at
risk of STDs should also use a female condom or male latex condom to prevent disease.
Your clinician can give you more information and help you decide if the patch is right for
you.
You should not use the patch if you:
WARNING SIGNS Report any of these signs to your clinician as
soon as possible:
eye problems such as blurred or double vision sudden shortness of breath or spitting up blood yellowing of the skin or eyes (jaundice) no period after having a period every month What if I decide to stop using the patch?
You may stop using the patch at any time. You should use another method of birth
control if you do not want to become pregnant. Call the clinic if you want to discuss
and/or receive another method of birth control. If you wish to become pregnant, there
may be some delay in becoming pregnant.
Remember…regular exams for routine healthcare including screenings for
sexually transmitted diseases and cancer are strongly recommended!
Questions??
If you have questions about side effects, or if you are unsure about using the patch-call the _______________________________________________________________________

Transgenic Animal Model Core Ann Arbor, MI 48109-0674 Mouse Embryonic Stem (ES) Cell Training The purpose of the class is to provide training in all aspects of ES cell culture manipulation and to provide the scientific background needed to make a gene targeted (gene knockout) mouse. You will both methods and the principles behind the methods. The Mouse Embryonic Stem Cell Training Course i