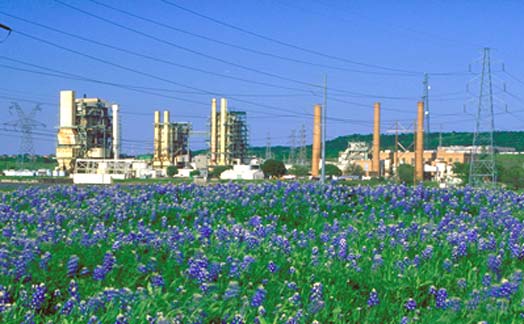 Exelon plugs into $7.9 billion power deal Story URL: http://news.medill.northwestern.edu/chicago/news.aspx?id=185608 Story Retrieval Date: 5/12/2011 10:51:46 AM CST Exelon/MEDILLExelon plants, such as Mountain Creek Generating Station in Texas, will be joined by five nuclear reactors if the Constellation acquisition goes through.
Exelon plugs into $7.9 billion power deal
by KATE SPRINGER
April 28, 2011
Exelon Corp. announced Thursday its intention to acquire Constellation Energy Group Inc. for $7.9 billion. If regulators and shareholders approve the deal, it would make Exelon the largest electricity marketer in the U.S.
The stock-for-stock deal is the fourth consecutive takeover attempt for Exelon since 2003.
Constellation is actually a competitor for Commonwealth Edison’s customers and is offering electricity at lower rates in its service area. This relationship could create antitrust concerns among regulators.
Exelon downplayed that possibility, saying that the company expects that the deal will eventually be approved by the U.S. Department of Justice. Still, Exelon anticipates that it will have to meet some conditions.
“We have analyzed market power considerations and expect that we will need to divest approximately 2,600 megawatts of generation in [the Pennsylvania, Jersey, Maryland Power Pool],” wrote Exelon spokesman Paul Elsberg in an email.
Antitrust regulation is just one of many obstacles the companies will meet before the deal is finalized.
“There are two big hurdles,” said Travis Miller, a Morningstar Inc. analyst. “The first is receiving a blessing from Maryland regulators who have been tough in the past and particularly tough on Constellation. The second is facing the Federal Energy Regulatory Commission, which will rule on market power issues in the wholesale power market.” Given that Exelon and Baltimore-based Constellation will have a significantly larger fleet in the mid-Atlantic region than any other, the latter could prove difficult.
The Citizens Utility Board, an Exelon critic, said that it plans to study the deal and if need be, report red flags to regulators.
http://news.medill.northwestern.edu/chicago/news.aspx?id=185608&print=1

Exelon plugs into $7.9 billion power deal “It’s always a concern when a top generator in the state vies to own the top utility in the state and a top competitor to that utility,” said Jim Chilsen, Citizens Utility Board director of communications.
“Are we really building a healthy competitive electricity market or do these financial maneuvers just erode a chance of that?” he added.
With Exelon offering a 12.5 percent premium based on Wednesday’s closing price for Constellation shares, analysts said the transaction would serve Exelon shareholders poorly.
“We think it’s a good deal from a strategic standpoint but the pricing is way too expensive from Exelon’s standpoint,” said Miller. “There’s a lot of upside to Exelon’s stock price and given that they’re using shares to buy Constellation, they are giving up that to some Constellation shareholders.” Analyst Raymond Moore of Wellington & Shields Co. LLC agreed.
“Exelon wants to grow. It’s all dressed up, but has no place to go,” he said. “So now you have a company that’s for a sale and a company that’s was looking to buy something. “ Exelon expects the deal to have a neutral effect on earnings in 2012 and add 5 percent in 2013.
Moore said the purchase will keep Exelon busy for a while, but he doesn’t think that it will help growth.
“[CEO John] Rowe wouldn’t get into something that would dilute earnings results,” he said, “But do I think it’s going to improve their growth rate? Nah. I am expecting them to be neutral.” Despite analysts’ skepticism, Exelon representatives said the merger would increase opportunities for expansion.
“Constellation’s industry-leading customer-facing business will help to optimize the value of the combined company’s leading, low-cost environmentally advantaged generation fleet, and vice versa, to enhance our opportunity for profitable growth,” wrote Elsberg in an email.
Miller agreed that although overpriced, Constellation would augment Exelon’s present range of products.
“A big hole in Exelon’s portfolio has always been a retail energy business and a higher share of earnings from regulated delivery utilities,” said Miller. “This solves both those problems.” Constellation Energy has one of the largest U.S. retail power divisions, stretching across 13 states.
The transaction also ameliorates concerns about CEO John Rowe’s successor.
After the deal closes, Rowe plans to retire and Chris Crane, Exelon president, will take his place.
“Crane has been a key element on Exelon’s leading performance during the past few years,” said Miller. “We think shareholders will be very comfortable with him leading.” The deal also forges a relationship between Exelon and Électricité de France SA, Constellation's largest shareholder and the world's largest nuclear operator.
Exelon said it has no plans to build any new nuclear plants given weak power prices, but the deal allows the company to expand its nuclear fleet by 5 reactors and its nuclear generating capacity by 11 percent.
The companies expect the deal to close by early 2012.
Exelon stock closed up 69 cents to $42.18 per share and Constellation stock closed up $1.96 to $36.26 per share Thursday.
http://news.medill.northwestern.edu/chicago/news.aspx?id=185608&print=1