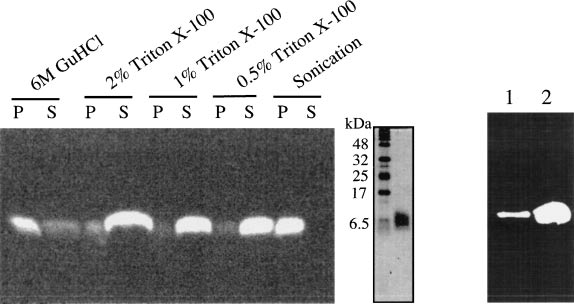 for 3 h. The puriﬁed protein was precipitated by adding of the expressed  protein with native  apoprotein and an equivolume of cold acetone and placed at À30 C for BChl a followed the same procedure as described 3 h. The samples were lyophilized to dryness and stored at À30 C. For cell-free expression using the RTSE. coli HY500 kit, the synthesis reaction was initiated by mixing the E. coli lysate, amino acid mix, and energycomponents with the constructed plasmid in a 1 ml The pET-20b(þ) vector is known as a powerful reaction compartment. Substrates and energy compo- system for the cloning and expression of recombinant nents were supplied by a way of continuous-exchange proteins in E. coli with high expression levels and via a semipermeable membrane, and at the same time precise control of induction. But the high expression potentially inhibitory reaction by-products were diluted levels tend to result in the formation of inclusion bodies.
via diﬀusion through the same membrane into a 10 ml Hence we ﬁrst investigated the localization of the LH1  feeding compartment. The reaction was conducted at protein expressed in E. coli cells by employing either 30 C for 24 h at a stirrer speed of 150 rpm. The reaction 6 M guanidine hydrochloride (GuHCl) or 0:5$2:0% mixture was centrifuged at 144,000 g at 4 C for 1 h.
(w/v) Triton X-100 for solubilization of the expressed Precipitate was solubilized in the solubilization buﬀer at products. The results are shown in Fig. 1. After 22 C for 1 h followed by centrifugation at 144,000 g, disruption of the cells followed by centrifugation at 4 C for 1 h. The expressed protein contained in the 144,000 g for 1 h, expressed  apoprotein was found in supernatant was puriﬁed with a Ni-IDA agarose column the precipitate. Triton X-100 was shown to be eﬃcient in a way similar to that of the protein expressed in for solubilizing the  protein, and 0.5% (w/v) was suﬃcient for extracting all of the expressed product. Incontrast, 6 M GuHCl failed to solubilize the  apoprotein Characterization of the expressed LH1  apoprotein.
expressed in E. coli. This result indicates that the  A reverse-phase HPLC column (Source 5RPC ST4.6/ apoprotein was expressed in the cell membrane rather 150, Amersham Pharmacia Biotech, Uppsala, Sweden) than in the form of inclusion bodies. After His-tag was used to investigate the elution behavior of the aﬃnity chromatography, the expressed  protein was expressed  protein at a ﬂow rate of 0.7 ml/min and a puriﬁed to a single band, as was conﬁrmed by column temperature at 20 C. The solvent and solvent Coomassie-stained SDS-PAGE (Fig. 1, middle). For gradient used were described previously.23) Expression the cell-free synthesis system, overexpression of the  yields were evaluated by BCA protein assay reagent protein was also observed. In a small-scale puriﬁcation (Pierce, Rockford, Illinois, U.S.A). Mass measurements experiment, most of the expressed product was found in were performed using MALDI-TOF/MS (REFLEX III, the insoluble fraction after low-speed centrifugation of Bruker Analytic, Rheinstetten, Germany) by the method the reaction mixture at 14,000 g for 10 min, but a small described previously.23) Circular dichroism (CD) spectra fraction remained in the supernatant (Fig. 1, right).
were recorded on a J-720w spectropolarimeter (JASCO, Thereafter, the reaction mixture was centrifuged at Tokyo Japan) with a scan speed of 5 nm/min, band 144,000 g, 4 C for 1 h, and the His-tagged  protein was width of 1 nm and resolution of 0.5 nm. Reconstitution puriﬁed by the same procedure as that for the protein Identiﬁcation of the Expressed Products.
Left: Western blot analysis of the gene products expressed in E. coli on 20% SDS polyacrylamide gel. The membrane fraction was solubilized by 6 M GuHCl and Triton X-100 at diﬀerent concentrations. The letters P and S represent precipitate and soluble fractions respectively, after thesolubilization treatment. Middle: Coomasie brilliant blue stained 20% SDS-PAGE of the puriﬁed -apoprotein expressed in E. coli withmolecular markers. Right: Western blot analysis of the gene product expressed in the cell-free synthesis system on 20% SDS polyacrylamide gel.
Lane 1 and lane 2 represent soluble and insoluble fractions respectively, after centrifugation at 14,000 g at 4 C for 10 min. 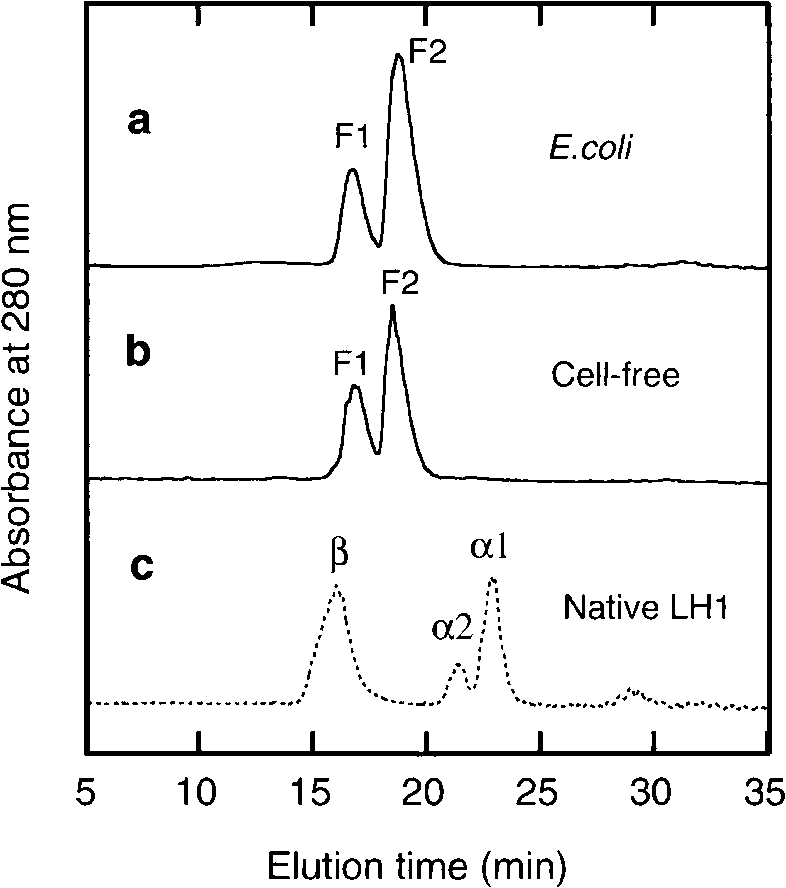 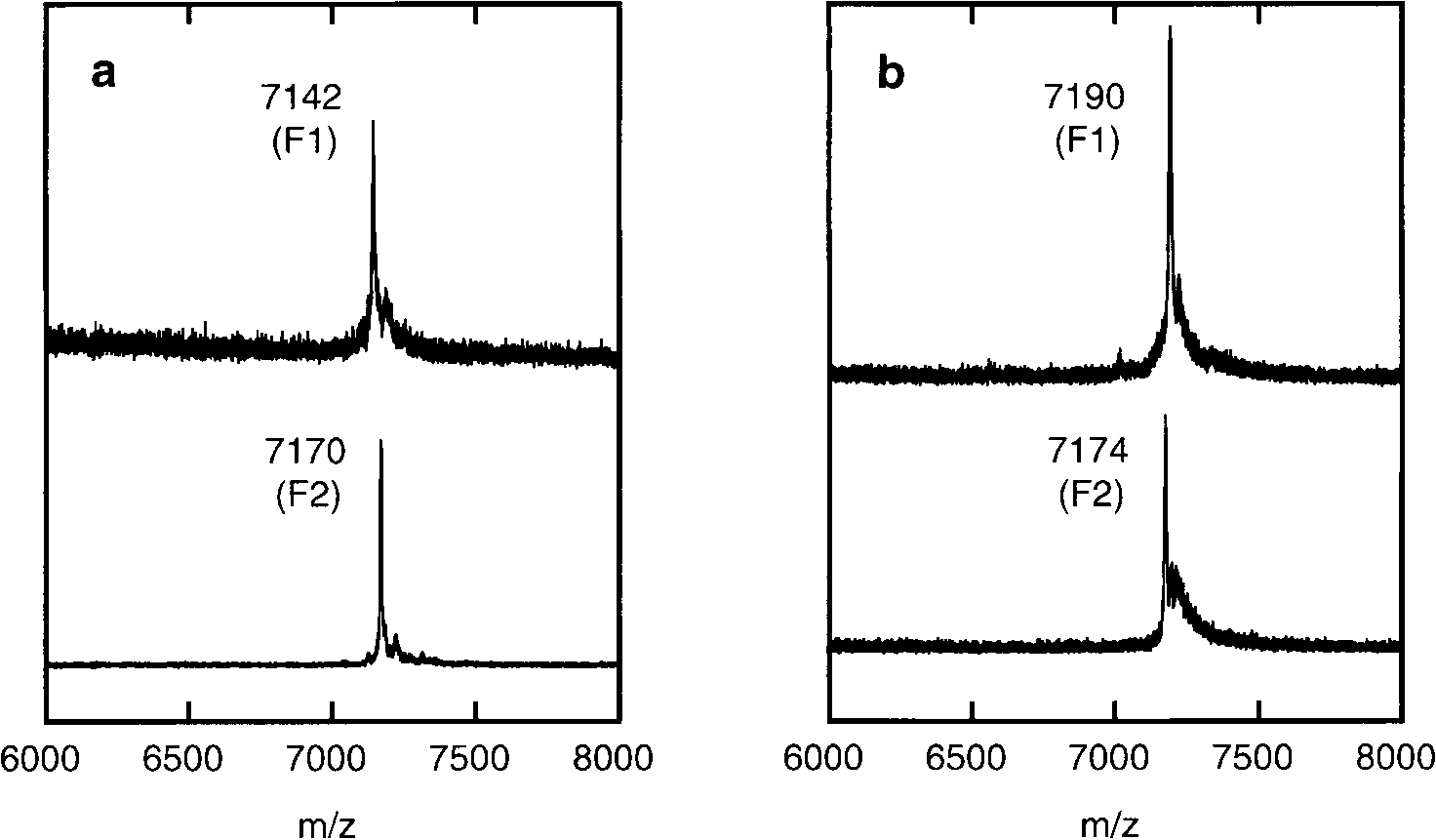 Expression and Characterization of LH1 Apoprotein expressed in E. coli cells. The expression yields were both systems had much shorter elution times compared calculated from all detergent-solubilized  proteins and to that of native  protein. Two fractions were observed were determined to be 1.2 mg/(l medium) and 0.7 mg/ for the expressed products from both expression sys- (ml lysate) for the E. coli and cell-free systems tems. To clarify their identities, these fractions were collected and subjected to MALDI-TOF/MS measure- The expressed  proteins were examined by reverse- ment. Figure 3 shows the TOF/MS results. The F1 phase HPLC chromatography. The results are shown in fraction from the E. coli expression system had a Fig. 2 together with the chromatogram of the native molecular mass of 7142 Da, consistent with the calcu- LH1 apoproteins. Due to the hydrophilic nature of the lated value of an unmodiﬁed LH1  protein based on the His6-tag at the C-terminus, the  apoprotein expressed in gene sequence (7141.2 Da, including the N-terminalMet). The molecular mass of the F2 fraction was 28 Dagreater than that of F1, suggesting that the F2 fractionfrom the E. coli expression system was a formylatedform of the F1 fraction. The slightly longer HPLCelution time for a formylated species was also observedfor the LH1  apoprotein from the thermophilic sulfurbacterium Thermochromatium tepidum.25) The majorfraction (F2) from the cell-free expression system had amolecular mass of 7174 Da. Because the  proteincontains no cysteine residue in its sequence and due tothe experimental errors, this component is thought tocorrespond to the  protein with an N-terminal formy-lated Met residue, although the measured mass wasslightly larger than the expected value (7170 Da). TheF1 fraction had a molecular mass 16 Da greater than thatof F2, indicating that F1 was an oxidized species of F2.
This result is in agreement with a previous study23)showing that the N-terminal methionine oxidation of the protein resulted in a slightly shorter elution time thanthat observed in this study.
Since the  apoprotein expressed in E. coli appears to Reverse-phase HPLC Chromatograms of the LH1 -Apopro- be inserted into the cell membrane, we need to know teins Expressed in E. coli (a) and the Cell-free Synthesis System (b), whether it has a properly folded structure and the ability Along with That of the Native Apoproteins of LH1 Complex (c).
to form functional complexes with  apoprotein and A linear gradient from 60% to 90% of organic solvents containing acetonitrile/2-propanol (2:1) and 0.1% triﬂuoroacetic acid was used pigment molecules. CD measurement was used to quantify the secondary structure of the expressed MALDI-TOF/MS Spectra of the Individual Fractions of the LH1 -Apoproteins Expressed in E. coli (a) and the Cell-free Synthesis 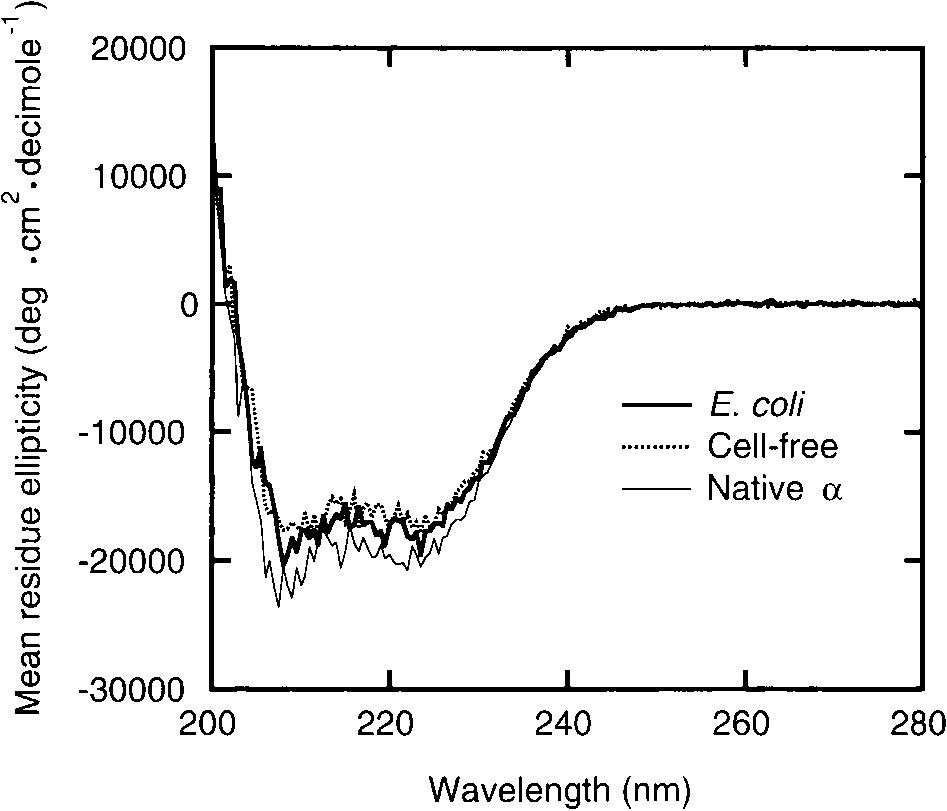 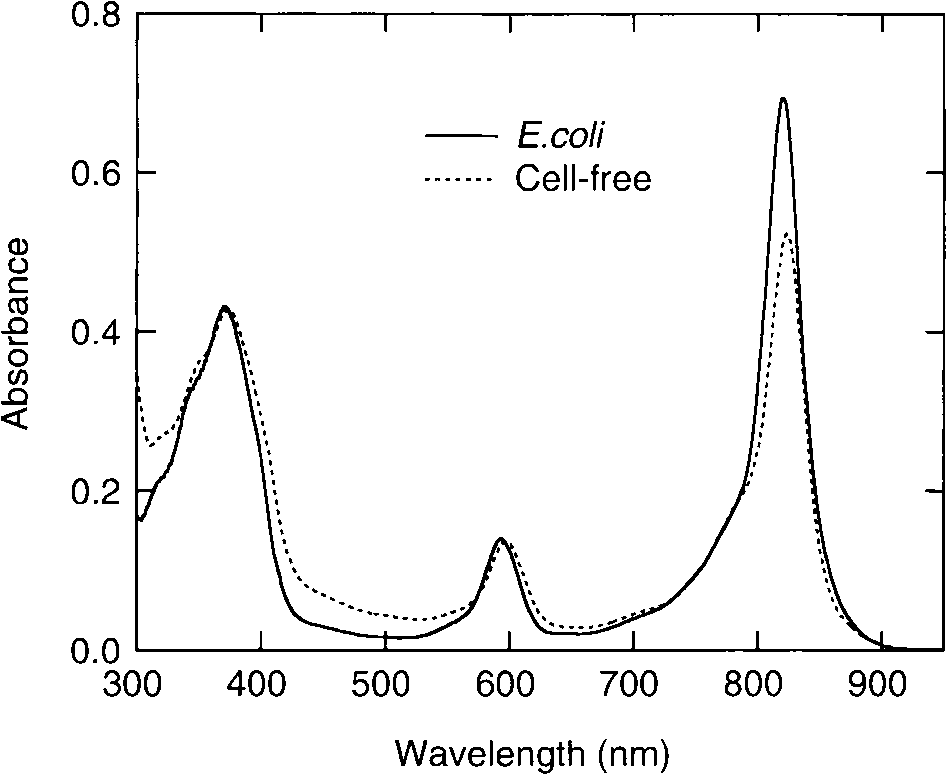 NICE: Opportunity or threat? Ginette Camps-Walsh is an international marketer who has worked in pharmaceutical and medical device companies for over 20 years. She was formerly the UK head for a pharmaceutical and medical device company specialising in radiology and is now a director of a health care company. She founded the Chartered Institute of Marketing Health Care Group and co- ordin