To our knowledge, population-based, published literature on salivary estradiol levels, particularly
for postmenopausal women and older men, are limited.

All respondents were asked to provide a salivary specimen; 90.8% (N=2,721) agreed, 2,640
respondents were able to provide a salivary specimen. This involved production of approximately
2 milliliters of saliva (unstimulated passive drool) into a small, code-labeled polypropylene
collection vial via a 5-centimeter section of a household plastic straw, following procedures
recommended by Salimetrics, LLC. The procedure required approximately 5 minutes. The time of
last food or water consumption prior to saliva collection was recorded.
Storage and Shipping
The salivary specimens were transported from the interview to a freezer using cold packs. Salivary specimens were stored in a freezer until they were shipped. The salivary samples were shipped to the lab on dry ice according to instructions. Upon receipt at Salimetrics, specimens were stored at -80°C in lab grade freezers. Shipping Address 101 Innovation Blvd., Suite #302
(see Salimetrics Salivary Estradiol Enzyme Immunoassay Kit package insert for details http://salimetrics.com/pdf/HS%20Estradiol%20E2%20Kit%20Insert.pdf ) On day of assay, the specimens were thawed completely, vortexed, and centrifuged at 1500 x g (@3000 rpm) for 15 minutes. Clear samples were pipetted into wells. The enzyme immunoassay was conducted at Salimetrics, LLC. The assay range was > 1 pg/ml. Assays were conducted in the following priority order: 1) estrogen, 2) progesterone, 3) DHEA, 4) testosterone, 5) cotinine and underwent 2 to 3 freeze-thaw cycles: thaw #1: sex hormone assays
thaw #2: a subset underwent repeat sex hormone testing based on quality indicators
thaw #3: cotinine assay 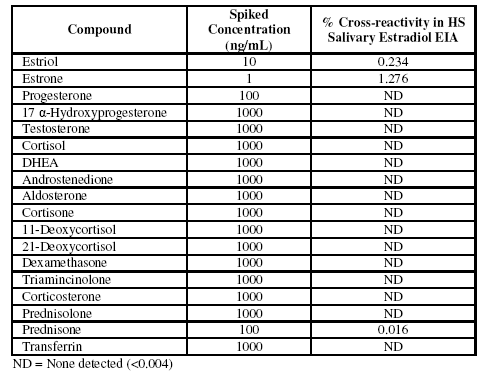 B. Sensitivity
The lower limit of sensitivity was determined by interpolating the mean minus 2 SD’s of the optical
densities of 10 sets of duplicates at the 0 pg/mL standard. The minimal concentration of estradiol
that can be distinguished from 0 is less than 1.0 pg/mL.
C. Correlation with Serum

The correlation between saliva and serum estradiol in females was determined by assaying 11
matched samples. Samples were screened for pH and blood contamination. The magnitude of
the saliva-serum correlation, r= 0.80, p <0.001, is consistent with the literature, in that the saliva-
serum correlation is stronger among women, than men (Shirtcliff, Granger et al. 2000), and intra-
subject correlation is higher, compared to between-subjects (Ellison and Lipson 1999). The
conversion equation from salivary concentration to serum concentration for this particular
estradiol assay is:
Serum E2 (pg/mL) = 2.171*salivary E2 (pg/mL) +7.1846.
D. Specificity of Antiserum
Table 4.
Reproduced with permission from Estradiol Quantitative Immunoassay Kit, 1-3702/1-3712, 96-Well Kit, April 10, 2006 (Salimetrics 2006) 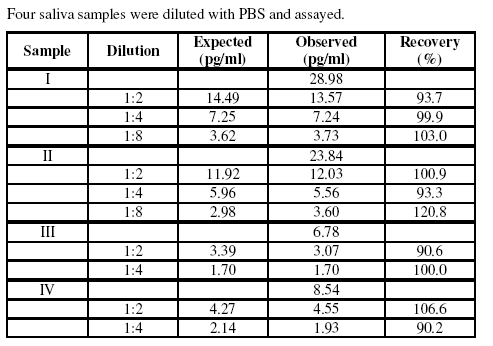 Run on each EIA test plate were six (6) standard calibrators ranging from 2 pg/mL to 64
pg/mL and two sets of high and low controls. The control ranges were established using a
minimum of 10 sets of data points across 10 plates. The mean and standard deviations were
calculated and a range was established (mean +/- 2 S.D.). A sufficient number of assay kits
and controls were sequestered for the project to minimize any lot-to-lot variations over the
course of the study.
Subjects’ saliva samples were run in duplicate (saliva pipetted into side-by-side wells) on a
single EIA plate. Assay results for each subject were acceptable when the values: 1.) fell
within the range of the calibrators (2 pg/mL - 64 pg/mL) , 2.) were >1 pg/mL, and 3.) the
coefficient of variation (%CV) between the duplicate results (result 1 and result 2) was <15%.
In instances where the %CV between duplicates was >15%, results were accepted if the
absolute value between result 1 and result 2 was <2 pg/mL. Values greater than the upper
assay limit of 64 pg/mL were run on dilution to bring the OD readings within acceptable range
(2 pg/mL - 64 pg/mL). In instances when a sample returned an extremely high result,
dilutions were made up to 320 pg/mL and a flag (**) and comment “interference likely” were
added to the report. Samples with results < 1pg/mL were also repeated. Values falling
between 0.5 pg/mL and 1 pg/mL were reported and flagged (*) with the comment “below
lower limit of assay”. Estradiol values less than 0.5 pg/mL were reported as “none detected”.
Estradiol data were compiled in ExcelTM by the testing manager and checked for accuracy by
the technical supervisor before final reports were emailed. Data was supplied with
corresponding assay plate number to facilitate the calculation of intra-assay and inter-assay
control values.
Availability

UMKC Dental School Commonly Prescribed Prescriptions Comment: Most dental practitioners will prescribe a relative small number of prescription medications. It is the responsibility of the dentist to be familiar with all medications they are using in their practice, including side effects, patient instructions, drug interactions, etc. It is strongly recommended you have immediate a