• Wholesale and retail establishment are more – Large number of small stores– Twice the per capita number of stores as US • Number of establishments / 1000 people • Smaller establishments – workers per – Extensive use of resale price maintenance – Lax anti-trust enforcement allows retail cartels – Most important policy was the Large Scale Retail Law • Covered stores that had over a certain minimum floor space • Law required that before a large store could be built, the – The Law Concerning Measures by Large-Scale Retail Stores for Preservation of the Living Environment was – 42% of wholesale sales are to other wholesalers enacted in 1998 and went into effect in 2000 • Focus on protecting the local environment • Construction plans must be brought before a prefectural • Land costs – high land cost means it is • Plan then goes to a committee for review • Often builders must convince local store owners that the • Adjustments are then made to floor space, days open, – Restrictions of competition should lead to excess profits and inefficiencies on the part of • In 1980 MITI issued guidance that suggested that this • Process leads to delays in opening large stores and additional costs as entrepreneurs have to buy off their • People have argued that the system is inefficient, difficult to penetrate, results in – Yes– Gradual increase in size of retail – Workers per establishment rose from 2.7 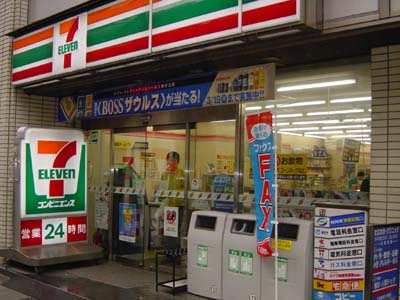 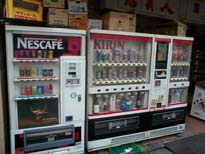 1978 becomes Seven-Eleven Japan Co., Ltd.
• New merchandise is brought in to replace • The total SKU count is maintained around

– Traditional, richer tasting, heat pasteurized in the end, cold fermented, aged 20 - 70 days, – Lighter tasting, not heat pasteurized in end – Draft beer fermented to a greater extent, less • After WWII the occupation forces split up • Before 1940s, beer is novel and expensive • In 1949 Dai-Nippon is split into Nippon and • Group of companies, localized brands, common ownership – Kirin has 25% market share– Beer is supplied to soldiers during WWII – Masses of Japanese exposed to beer for the first time – Like richer, heavier and more bitter taste than today’s • 1963 Suntory, Japan’s oldest and largest • Kirin focuses on home market (only 25% of • Over time Kirin builds formidable empire – Develops extensive distribution market – Sapporo and Asahi focus on commercial market • Kirin is the only national player after WWII • Asahi – Western Japan, Osaka but not Tokyo• Sapporo – Eastern Japan, Tokyo but not Osaka – Businessmen who travel between Tokyo-Osaka want • Sapporo, Asahi, and Suntory push draft – Product differentiation – packaging and – Quality control of draft beer is difficult – Numerous sizes of beer cans and bottles – Only served fresh at beer halls in summer • 1977 “mini barrel” introduced by Asahi for – No bottled or canned draft beer until 1960s – Kirin does not sell draft beer for home • 1980s Suntory provides beer in unique 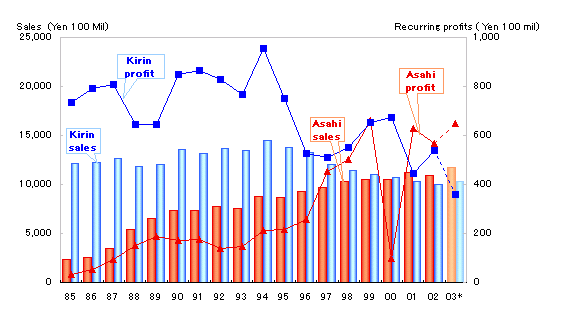 • Microbrew (regional beer) (ji-biru)• 1994 Government regulations liberalized – Anyone can open up their own small brewery • By 1996 about 50 small independent small • 1997 Asahi Super Dry becomes #1 beer brand• 2002 Asahi overtakes Kirin, buys Orion• 2003 Market Shares • “Japan and its acolytes, such as Taiwan head-on competition between free-trading societies and capitalist developmental states, the free traders will eventually lose.” James Fallows • “The US must either begin to compete with • Institutional framework is key to Japan’s success – Government forms consensus and guides investment if they must ignore or fire some academic – Complex set of policies that work together to achieve – Usually centers around administrative guidance, ignore the view that ‘countries that try to targeting, planning, and non-coercive suggestions – Implies that the government used a variety of policies them than countries that don’t.’” Chalmers • Move economy into high growth sectors – The systematic selection of industries to be encouraged or discouraged by government action or – Remove anti-trust laws which hinder international • Move labor and capital from uncompetitive – Use of various government policy measures to sectors with a minimum of social disruption deliberately restructure industry over time toward • Encourage productive investment of capital in higher value added, higher productivity industries high risk, large scale, or long projected payback – Anticipate rather than react to international • Promote R&D where public returns > private – Policy to revive and expand basic manufacturing – Coal, steel, electric power, transport industries, – MITI adopted additional measures to facilitate automobile, petrochemicals, petroleum refining, and structural adjustment and capacity reduction in the declining industries after first oil crisis – Japan joins GATT in 1963, and IMF and OECD in – Liberalization of trade polices– MITI shifts from basic manufacturing to knowledge Mature Phase
Phase Out
• If there are externalities or economies of – Under these conditions, restricting imports will biotechnology, new materials medical instruments, information • Need to remember there will be winners and – Helping one industry pulls resources from all others (including other industries with economies of scale) • Foreign subsidies greatly benefit domestic consumers • Intervention in certain markets (capital markets) may require compensating interventions in other – Restrictions on capital flows (in & out) until 1980– Equity, bond, and interest rate restrictions • Restrictions of foreign inward direct investment • Direct limits on discount window borrowing • Closure of capital markets kept interest rates low • Banks make more loans than private market can fund• BOJ makes up the difference • MITI controlled access to foreign currency until – Restrictions on opening of bank branches – FILP, postal savings, and government investment – Many Japanese bureaucrats in postwar period were – Three possible solutions to overvalued yen • Didn’t understand “gains from trade” • Do nothing and allow for a large deflation – Faced problem in 1955 when yen was overvalued ($1 • Take direct controls on imports and try to promote • Without capital controls, it is not a problem• But Japan had capital controls, so Japan was running • MOF/MITI controlled access to foreign currency • MITI approach led other countries to • Allocated it mainly to support imports of raw materials – Many countries remembered the import surges of the – MITI had to bring down domestic barriers in order to • Thus prices of raw materials in Japan were too low and prices of consumption goods were too high • Led to large number of restrictions on imports • Removed 1837 quotas between 1960 – 1963 • Had 192 quotas in 1964, and only 69 by 1972 – Many trade barriers came down in 1964 when Japan • Led to reduction of foreign barriers as wel • Japanese exports rose more than imports • High tariffs on products which competed • Perhaps they should have liberalized earlier • Some 40% tariffs on certain types of autos until – MITI learned it could do fine without barriers • Import surges of Japanese cars didn’t start until • Gradually MITI became more free trade oriented much later (after much of the protection was • Most residual barriers were lifted over the next • Much of the protection of steel was lifted in early – Non-agricultural tariffs are lower than US and – Special tariffs on computers and ICs have • But everyone was protected until 1980s • Only on charcoal briquettes, a few types of leather – Also had tariffs on Integrated Circuits (ICs)

FDA Public Health Advisory on Crestor
– Government does not accept test data on (rosuvastatin)
Astra-Zeneca Pharmaceuticals today released a revised package insert for Crestor (rosuvastatin) (link to FDA approved labeling). The changes to the label include results from a Phase 4 pharmacokinetic study in Asian- – But poor performance of US car makers in Americans and highlight important information on the safe use of Crestor to reduce the risk for serious muscle toxicity their markets suggests this is probably not so (myopathy/rhabdomyolysis), especially at the highest approved dose of 40 mg. At this time, the FDA is also making statements about the muscle and kidney safety of Crestor based on extensive review of available information.
• Very little subsidization of Japanese • Especially true in high tech industries • Government subsidies are usually less • Japanese government R&D expenditures highly – Agricultural subsidies account for 50% of total – Orders of magnitude less than US and – Supports 28% of railway, aircraft and shipping R&D– In most high tech sectors, subsidies < 1% of R&D • Tax breaks are major method of industrial policy • Japanese government spent $48 million on • Japan does not seem to be different from most – In 1950s and 1960s Japan used a lot of tax measures • US spent $90 million on non-DOD and $310 – Big difference between Japan and rest of the • In 1950s 50% of cost of a new auto plant could be written off • France subsidizes 72% aircraft R&D – But used so heavily that they probably canceled each • US subsidizes 50% of machinery R&D • Today Japanese taxes seem more harmonized – Researcher bias, source bias, survivor bias – US has lots more special tax credit programs • Some industries succeeded with support • Effective tax rates vary considerably – Aluminum, commercial aircraft, coal, chemicals, – Japanese effective tax rates range 35% - 44% • Some industries were successful without government – US taxes provide $2 billion incentive to R&D – Japanese taxes only provided $140 million (1981) – Sewing machines, cameras, bicycles, motorcycles • Objective of Japanese tax system seems to be – Pianos, radios (1950s, 1960s)– Color TVs, tape recorders, magnetic tapes • Industrial policy was not implemented as – MITI is not GOD– MITI tried to cartelize the auto industry in the 1950s and early 1960s into one or two firms – Sony and the transistor– Honda and cars